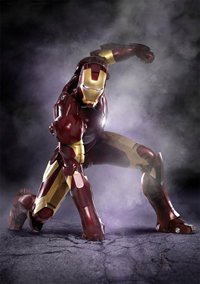 This Friday, Iron Man hits theaters. Chances are you’ve seen at least a poster and a commercial for the flick. There’s also a good chance that you’ve probably seen multiple trailers, read stories about the movie online, and perhaps, viewed some promotional scenes.

Maybe you’ve even go so far as to watch all the promotional scenes, look at the hundreds of stills available online, buy the game, buy the novelization, and build yourself a suit of home-made Iron Man armor.

The question though, is, at what point is there too much marketing for a film? There’s a lot of attention being paid to Iron Man‘s box office results this weekend, and for good reason.

1) It’s “going up against” Grand Theft Auto IV,
which will probably make more money this week than any entertainment
product in the history of time itself. The question is, if you’re
spending $60 on a game, will you want to spend another $10 on a movie?

2) It’s a second-tier superhero, meaning not many people know Iron
Man they same way they know Batman, Superman, Spider-Man, or even the
Hulk or X-Men. Can you effectively market a superhero no-one has heard
of, and even most comic book fans don’t like?

3) We’ve now seen a cycle where X-Men was an unknown quantity; people were shocked that Spider-Man
did so well on its first round; we got several more quality superhero
flicks; and then we got the mega-grossing but universally reviled X-Men 3 and Spider-Man 3 . Will Iron Man sound the death toll of the superhero film genre, or its second renaissance?

For all these reasons, and more (Robert Downey Jr.’s star power, Jon
Favreau’s career, Gwyneth Paltrow’s sexy red hair), there’s a lot of
attention being paid to this film. And, for that reason, Paramount is
taking the tact of marketing the film as if it was a brand new
character. Which, for many people, comic book fans included, it is.
However, this has taken the form of a marketing glut.

So when does it take a turn from “Oh cool, a new trailer,” to “Oh my god, shut up about Iron Man already” to a Snakes on a Plane -style bomb?

With Iron Man,
Paramount knows they are standing in front of a good product, and so
their marketing efforts read as, “We’re proud of this, we have nothing
to hide, we would happily show you the film right now if we could.”
This sort of confidence seeps into the viewing populace. And, it
certainly doesn’t hurt that numerous publications are writing articles like this one, talking about Iron Man‘s marketing campaign. (That’s part of the marketing campaign too, isn’t it?)

And on the off chance that, the week before, viewers are feeling Iron
Fatigue, advanced screenings have started to create positive buzz, with
reviewers stating that the movie lives up to the hype. That, in
essence, backs up everything a viewer has learned over the past few
months: the movie looks good, and I was correct, so now I’ll go see it.

Whether Iron Man is actually good, or not, only your own
viewing will tell. As for me, I’ll be there opening night, because the
trailers, and the pictures, and the scenes, and the novel, and the game
all look amazing.