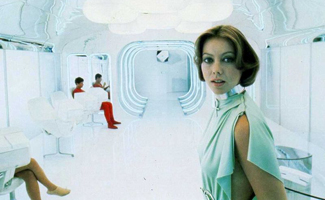 Find me a sci-fi movie where there is a Utopia, and I will point out the worm in the apple. Every single time we are presented with a Utopian society on film, there is also a corrupt diplomat that’s running the show, or it’s a dream world, or it’s built on a city of good-hearted underground dwellers… You know what I’m saying because you’ve all seen such movies before.

So I’m going to make a broad statement and say: There is no such thing as Utopia in science fiction.

The prototypical example of this, and perhaps the genesis of this whole meme, is H.G. Wells’ classic The Time Machine . In it, the Utopian race of the Eloi lives in blissful harmony, at least on the surface. In fact, their society is completely dependent on the bestial Morlocks. Both races depend on each other for survival, and neither is complete as a species.

Pretty much every tale of a sci-fi Utopia from there out embraced
the idea that no Utopia could work without someone pushing the gears.
Whether it’s robots, humans, or some combo of the two, every Utopian
society has a dark, disturbing secret behind it.

There are other approaches to the Utopian/Dystopian dichotomy, like Logan’s Run , and Soylent Green ,
both of which depend on murder to keep their “perfect” societies going.
There’s also the Big Brother/1984 approach, which has been used time
and again: A perfect society enforced by a totalitarian regime that
needs to be taken down (usually by one man or woman). In fact, there’s
no science fiction (excepting, possibly, a short story here and there)
that presents any sort of actually perfect future world.

There’s a big, glaring reason for this, of course, and it’s the
second word in the term — fiction. Sci-Fi is, of course, fiction, and
fiction relies on drama. There is, inherently, no drama, no conflict in
a perfect Utopia. Storytelling is an act of moving the characters
forward in some way. So if they’re standing still the entire time, you
haven’t done your job as a storyteller.

So what do you think, readers: Is there a way to tell a story about
Utopia without it having a secret Dystopia behind it? Has there been
one that I’m just ignoring?