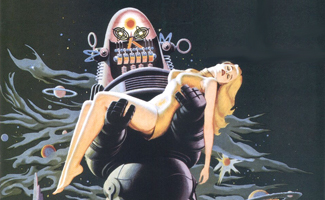 Naysayers who debate why the future has yet to arrive always point to the distinct lack of robot butlers.

Granted, robots are making headway in Japan… There’s a robot greeter out there who can give directions, and gets upset when you grab her inappropriately (this is not a joke). And recently, dancing robots have been all the rage. However, the independent automaton is far from a daily reality, and I can’t help but think that scifi is to blame for this.

In the history of science fiction, there have been very few helpful robots. Most are secretly murderous AIs who can’t wait to turn on their creators. The most famous of these probably being HAL, from 2001. You could also bring up the entire plots of the Terminator or Matrix trilogies, which hinge on robots not only hating us, and wanting to kill us, but also, winning.

However, if you want the real root of this, you need go no further than Isaac Asimov’s Three Laws of Robotics:

What Asimov did when he built the three laws in “I, Robot,” was
essentially make a dare to his characters. You don’t create laws
without eventually showing how they can be broken, and what the
repercussions may be. And they do get broken, though with significantly
less Will Smith than you may remember. Obviously, I, Robot
isn’t the first time a robot went haywire, but it did lay the
groundwork for future robot attacks… It wasn’t (always) because they
were evil; it was because they wanted to live.

Now that we’ve set up the basis, we can address the initial
question: Why are there no robot servants? Well, before we can get to
that, there’s another reality that must be addressed, which is that as
much as science affects scifi, scifi also affects science. There’s a
very strong give and take between the two, to the point where
scientists will create a new invention in the mold set forth by the
scifi before it. Otherwise, why would we have clamshell cell phones, if
not for Star Trek‘s communicators?

Since we know that scifi affects the development of science, and the
majority of stories involving robots and/or AI involve them going
berserk/killing everyone, doesn’t it stand to reason that science would
make no great effort to hasten the coming robo-pocalypse?

Take a look at how the news is presented when there is a leap
forward in the development of robotics. In particular online, a snarky
blogger will, undoubtedly, make a joke about “our new robot masters.”
In the papers, the discovery is often buried in the science section, if
published at all. Don’t you think, if we really wanted robot butlers,
we’d be pushing for them? Don’t you think they’d already be here? And
don’t you think the reason they’re not already here is that we’ve been
trained over the past 80 years that when the robots come, the time of
humans is over?

Whether it’s true that robots would eventually take over the Earth
or not, the fact remains that having seen what fiction we’ve seen… We
may never develop robots to the point where they can even properly
function.