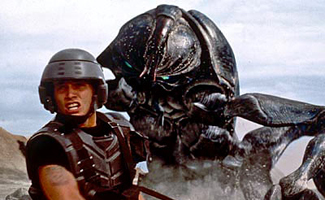 The history of science fiction is littered with satire. Here are three underappreciated films which approached satire in relatively different, but hilarious ways.

Starship Troopers
Paul Verhoeven’s 1997 war flick is probably the best English language movie the director has ever made. A perfect fusing of clueless actors, a brilliant script, and pitch perfect direction, Starship Troopers coalesced a number of the ideas Verhoeven had seeded throughout previous films. The dystopian future and sly satire of Robocop and Total Recall , the over-the-top sexuality of Basic Instinct and Showgirls , all came together in one beautiful, ridiculous package. When a bunch of pretty boys and girls go to war against the evil Bug menace, it’s implied, but never said, that the Bugs are, in fact, the good guys, and we’re the evil invading force. This is never clearer than when Neil Patrick Harris essentially enters towards the end of the movie wearing a Nazi uniform. The upcoming Starship Troopers 3 is looking to recapture its progenitor’s tone, but so far, seems to be missing Verhoeven’s sly, subversive touch.

Idiocracy
Probably the most blatant satire on the list, Mike Judge’s comedy
posits a future where stupid people breed out of control, while the
smart people “wait until the right time.” This leads to a society where
Fuddruckers, through one hilarious sequence, has morphed slowly into
Buttf–kers, the President of the United States is a former wrestler
named Camacho who shoots off guns in Congress, and water has been
replaced by Brawndo, which has the “electrolytes that plants crave.” A call to arms, Idiocracy
is a movie that is both ridiculously off, and scarily accurate. It also
has more jokes per capita than any movie released in 2006. Or
2007. Or 2008, for that matter.

Demolition Man
Yes, Demolition Man.
A movie starring Sylvester Stallone, Wesley Snipes, and Sandra Bullock.
Get past the straightforward action movie set up, and you’re sent to a
future where every restaurant is now Taco Bell, after the “great fast
food wars.” Also in the future, nobody touches each other, everybody is
happy, and the whole society is built on a sewer dwelling, starving
populace. It’s not the subtlest satire, but there are more sharp jabs
than there need to be in an action movie, and Sylvester Stallone’s
reaction to eating a rat burger is priceless.

So what did we miss, Scanners? What movies should we feature in “Three More Underappreciated SciFi Satires?”