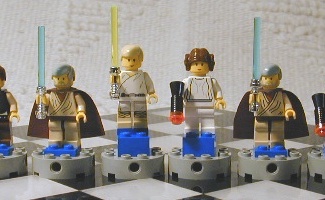 Creating a perfect storm of classic nerd fan-worship, Lego now offers a chess set which employs Star Wars characters as its pieces. Kings Luke Skywalker and Emperor Palpatine oversee their armies, which include queens Leia Organa and Darth Vader (did Anakin get a promotion that I’m not aware of?).

If the idea of a checkmate being determined by lightsaber battle doesn’t do it for you, other options are available: a medieval set which pits the good guys against an undead army, a Robin Hood set, and cowboys and Indians (which struggles to remain morally ambiguous). But if it’s an epic war between good and evil that you’re looking to re-enact, then the choice is clear. Maybe this time around Vader will actually have his day…