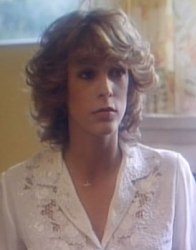 Take a good hard look at your own prom picture. (Go ahead and dig it out, I’ll wait.) Does it already look tragically out of date? Do you appear to be having more fun than you really were? Or is there really still a spark there, a portrait of the glory of youth?

The original Prom Night is all of these things. And still, filmmakers keep hauling Prom Night back to its feet year after year. After three sequels and now a full-fledged remake, we can’t help but feel a little silly as we watch the original, but it’s familiar enough that we can’t look away. John Carpenter had already thrown a coming-out party for Jamie Lee Curtis two years earlier with Halloween, making her casting as Kim Hammond a tad redundant. Yet without her warm liquid eyes, beautifully grave facial expressions — and, yes, super-freaky disco dancing — there would be no reason to care about this slash-by-numbers affair.

Alright, that’s not entirely fair. The film’s ten-minute opening
is as memorably wicked and iconic as anything the ’80s produced (though
the opening credits beginning with two of the least scary words in any
language– “Leslie Nielson”– provide the first of many unintended
laughs). This scene, in which a cadre of children stalking each other
in an abandoned school building get a little too wrapped up in their
game, perfectly taps into the ravenous, mindless dread of
pre-adolescence, and the fatality that results is delivered with a
satisfying crunch that would make even Shirley Jackson wince. Would
anyone would have ever sat through the rest of this film if director
Paul Lynch hadn’t knocked it out of the park in the intro?

Six years later, the creepy phone calls begin just as the surviving
children are picking out corsages and unburdening themselves of their
virginity — a sign that the film, like its characters, will be all
hormones and no brain. And once the prom itself gets rolling, your own
brain becomes marinated in the tepid bathwater of a relentless disco
soundtrack, underscoring even the climactic final battle between our
heroine and the Masked Villain, giving it the nail-biting tension of a
Benny Hill chase scene. I have to admit though, the sight of Jamie Lee
Curtis swinging an axe will always makes me feel more warm and tingly
inside than my actual memories of Prom, which is probably why I’m
likely to stay home and rent Halloween: H20 instead of attending my own 10-year reunion.

Prom Night buds anew this weekend, whispering the same sweet
promises and deadly threats. Be warned, kids: You may laugh now at the
original’s loopy Blue Bazar tunes, but a Britney and Timbaland
soundtrack will age no better, and today’s bumper crop of starlets will
be tomorrow’s Real Housewives — although I suspect recklessly losing
one’s virginity will never go out of style.