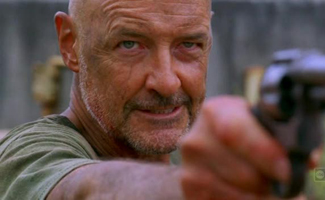 Maybe time (pun intended) will prove me wrong, but Lost is definitely a science fiction show. Despite the unexplained smoke monster and the general weirdness surrounding the island, Lost has firmly planted its foot (four-toed, natch) in the realm of science fiction this season, starting with the landmark episode, “The Constant,” straight through to last night’s Ben-centric kill-fest.

Oh, and by the way, spoilers abound.

In “The Constant,” we found out that Desmond’s psychic abilities weren’t some sort of strange mystical phenomenon, they were based firmly in science. Pseudo-science, granted, but they were caused by radiation and time travel, two clear hallmarks of scifi film and literature.

In case you doubted that Lost was going to follow up on the
time travel thing, last night’s episode only helped to confirm this.
Ben shows up in the desert, and asks what date and year it is from a
Tunisian clerk. Ray — the doctor from the freighter — washes up on
the shore dead, but he’s also alive on the freighter (shades of
Schrödinger’s cat, perhaps?) These all point to a continued use of the
time travel anomalies that popped up earlier in the season, and will
most likely continue to be elaborated on through the remaining episodes.

For the first half of its life, Lost straddled the line
between explainable and inexplicable. Mysteries were open to
interpretation, and could have fallen in the realm of science fiction
or fantasy. But once the creators made the decision to explain one
major puzzle — Desmond’s abilities —  with science, they can’t
close that door. “Well, we explained that one with science, but nothing
else!” won’t fly as an excuse, either dramatically, or to the the
satisfaction of fans.

So what are the explanations? Well, I don’t know. I’m not sure why
the babies are dying, or where the smoke monster comes from. But given
that Ben can control it (surprise!), it seems that it, too, has a
scientific explanation. Furthermore, consider that last night’s episode
was called “The Shape of Things to Come,” a scifi story by H.G. Wells…

I may be proven wrong, but I’ve based my reasoning on good, clean, science. Chances are the writers of Lost have too.