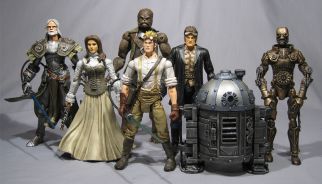 Ever wonder what Luke, Chewie, Han and the rest of the gang would look like re-imagined as steampunk characters? These custom designed Star Wars steampunk action figures open up a whole new world of possibilities for the franchise. If only Lucas would allow other filmmakers to play in his universe. Terry Gilliam could probably pull off an amazing steampunk take on Luke, Vader,  et al. Or how about a dystopian vision of Wars directed by Ridley Scott? (Interestingly enough, artist Ralph McQuarrie’s original designs for Star Wars featured a much stronger steampunk flavor, as evidenced by the custom figures seen here.)

Sillof’s Workshop has also offered us a cool steampunk Iron Man who literally pumps steam out of his armor. (Also look for his take on the rest of the Avengers as well as designs for the Justice League based on the Gotham by Gaslight comics.) And if you’re in the mood for straight-up “what if?” designs, take a gander at his figures for Dune ‘s
House of Atreides. Somewhere in a parallel version of the 1980s, kids
are playing with a Paul Atreides action figure instead of Luke
Skywalker.