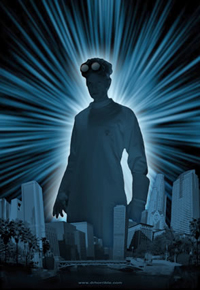 When geek icon Joss Whedon casually mentioned he had created a 10-episode web series during the recent WGA strike, the Internet, understandably, freaked out. Whedon’s series is called Doctor Horrible’s Sing-Along Blog, so naturally, it was only a matter of time before a fan blog sprung up in reaction to the news.

“When I heard about Doctor Horrible’s Sing-Along Blog, I knew there was going to be a lot of interest in it,” said the thirty-six-year-old owner of DoctorHorrible.net (who prefers to remain anonymous). “Before I’d had the chance to actually design the layout, the site got leaked to the Joss Whedon fan site Whedonesque. In a matter of hours there were thousands of people visiting, so I had to very quickly throw together a more appropriate design.”

Though there’s been little news about the web series, we do know
that it will be 10, three-minute-long episodes, and stars Nathan
Fillion (Firefly), Neil Patrick Harris (How I Met Your Mother), and Felicia Day (Buffy the Vampire Slayer). In fact, it was the last who made the website “official.”

“At one point Felicia Day referred to doctorhorrible.net as the
‘official’ fan site in her blog, and later that same day, one of the [series’]
writers said to me, ‘You are officially the official fan site,'” said
the site’s administrator. “That was enough confirmation for me.”

There’s no set release date for Whedon’s musical web series yet. But
as the time for it’s arrival draws near, and whenever there is news,
DoctorHorrible.net will be there. “I have a couple of people helping to keep up with the buzz and
contributing to the site’s content,” said the owner. “We’d also like to
think that there will end up being more than just three 10-minute
episodes, or another new series to follow, so who knows what the
possibilities are.”