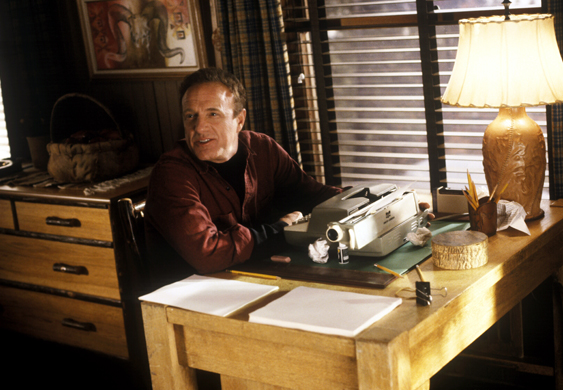 Time for some shameless grandstanding: My first hardcover novel, Infected, hit the shelves on April 1. While there were rumors of religious conservatives burning down stores that carried it, and some disturbing news of fans running around the stores screaming, “Buy this book if you hope to live,” it’s been a pleasant and calm process thus far.

This week’s topic: A look at how horror movies influenced Infected. All you aspiring writers, get out your pencil and paper, and really, if you don’t come sit in the front of the class, how is the teacher supposed to know you are serious about your education? Now I’d love to list Tolstoy and Gone With the Wind as influences, but I’m afraid my cultural reference points aren’t quite so highbrow. But here are the movies and books that did inspire me. (Oh, and spoiler alert: There will be a few reveals in this post.)

Nightmare on Elm Street, Part III: Dream Warriors
Infected
is about a sentient parasite trying to take over a human host,
“terraforming” him, if you will, and changing him into something more
suitable for evil purposes. Yeah, evil, that’s right. It’s a horror
novel — these parasites aren’t out to spread sunshine and lollipops to
the kids in the terminal ward.

One key scene in Infected
is when the parasites open their eyes for the first time. The idea of a
living creature in your own body taking over came in a rush during the
infamous hypodermic needle scene in Nightmare on Elm Street 3: Dream Warriors.
One of Freddy’s playmates is an addict, and during a dream sequence,
Fred’s fingers turn into hypodermic needles. She looks at her arm, and
her track marks are little mouths, opening and closing repeatedly,
practically screaming, “Feed us!” Freddy then does what he does for all
of us: He gives the girl what she truly wants. The scene disturbed
me… and immediately gave me a rough idea for a novel.

Shawshank Redemption ). The book itself was a major influence on Infected.
Not the story — the stories couldn’t be more different — but the way
King used typeface on the printed page. When Paul Sheldon (the freaking
awesome James Caan in the film) is making a new Misery book for
Annie, King uses a typewriter font instead of the normal text font. As
Sheldon keeps typing, the keys start falling off, and the letters are
filled in by hand. Just one letter at first, then one after another as
the story progresses. It does two things. First, it creates a novel
within a novel — you want to see what happens with Misery Chastain.
Second, as the handwritten letters keep piling up, it makes you
uncomfortable. The visual element of the text actually adds to the
anxiety and suspense of the story. It’s brilliant. This influenced me
to use typography in Infected to give the monsters a unique
visual voice. I don’t have any “hobbling” in it, but man, wasn’t that
one of the nastiest scenes in a horror movie ever? Maybe the best, if it weren’t for …

Evil Dead II
I
love this movie to pieces. Bruce Campbell is a god. We should freeze
him in carbonite and put him in the Smithsonian. The killer scene (in a
flick with numerous killer scenes) is Bruce’s battle with his own hand.
This legendary piece of cinematography combines physical acting, comedy
and the horror of having parts of your body acting of their own accord.
Yes, an evil accord. More importantly, the scene is about doing
what needs to be done to regain control of your partially possessed
body. When Bruce busts out the chainsaw and gives the classic line,
“Who’s laughing now,” I was riveted. Sure, the scene is slapsticky, but
Campbell sells the concept: Defending yourself against your own body,
not to mention removing the offensive part, really puts you on the fast
track to insanity. From the moment I watched it, I wondered how the
idea might play out in a larger novel. For those who have read Infected, they will see the influences by watching the scene. Evil Dead II is a total classic, a staple of the horror community, and I’m proud to list it as an influence for Infected. The next one, however, maybe I’m not so proud of…

Night of the Comet
Two Valley girls are the only humans left to battle a horde of zombies following a near-pass by a comet. This was a genuine movie.
Why did I see it? Well A: I lived in a small town and there wasn’t much
to do; B: it had zombies in it; and C: Catherine Mary Stewart and Kelli
Maroney appealed to my adolescent sensibilities, i.e., they were hot as
hell. Is this bad boy a classic? That would be a stretch. But what it
introduced me to was the concept that the apocalypse begins with real
people — people, who more than likely, have no idea what’s going on.
These girls wake up, find the world has gone south, and are left to
deal with the aftermath. That got me to thinking… I’d always seen
“Let’s fight the apocalypse” from the government point of view, through
the eyes of scientists, and via people who had the whole picture. But
you know damn well Johnny Trailer might not be watching CNN the
week the bad stuff hits… if there’s any warning at all. That’s were I
got the idea for the main character in Infected, Perry Dawsey.
He’s among the first victims of the infection, yet he has no idea
what’s going on, and no context in which to evaluate the situation.
Things just go wrong for him. Real, real wrong.

So poor, poor Perry Dawsey. He gets a Night of the Comet wake-up call,  which turns into the body betrayal of Dream Warriors, until he has to go to town on his own limbs a la Evil Dead II — and the whole thing is presented in the snazzy layout style of Misery. There are many more influences that helped shape the book, including a few takes on the “voices in my head” concept.

And if these influences aren’t enough to convince you, take a gander at the trailer: 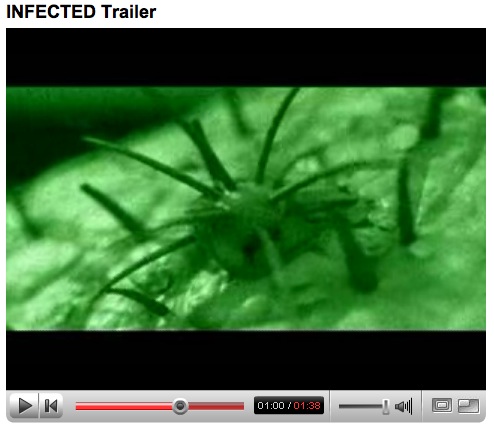 Scott Sigler writes tales of hard-science horror, then gives them away as free audiobooks at www.scottsigler.com. Infected, hit stores on April 1, 2008. If
you don’t agree with what Scott says in this blog, please email him
scott@scottsigler.com. Please include all relevant personal
information, such as your address and what times you are not home, in
case Scott wishes to send someone to “discuss” your opinions.