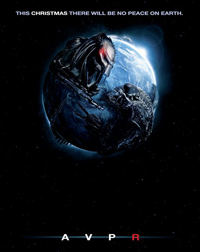 • In case you didn’t get enough cross-over space baddie action in the first movie, your two favorite alien hunters are back in Aliens vs. Predator – Requiem . Set immediately after the events of the first movie, a Predator ship crashes into a small town, releasing Aliens, Predator-Aliens, and Predators on the unsuspecting populace. Jacking the sequel up to an R rating allows the movie to get bloodier than its predecessor… but doesn’t mean it’s a better movie.

• Over the course of a little-seen movie, and an also little-seen television program, Alien Nation built a rich tapestry of a world where aliens are part of everyday life, but never accepted. Alien Nation – Ultimate Movie Collection, unfortunately, does not contain the original movie. What it does contain are five television movies that followed up on the plot threads of the original series. Well made, excellently structured, and yup, little-seen, these movies may not be the best place to jump into the Alien Nation universe, but it’s good news that they’ve finally been released on DVD.

• Uwe Boll gets called the worst director in film history a lot. You
might think that designation is a little kind, after watching In The Name of the King – A Dungeon Siege Tale . Liberally ripped off from (mostly) Lord of The Rings, In The Name of The King
isn’t saved by Jason Statham, Matthew Lillard, a terribly miscast Ray
Liotta, or even Kristanna Loken as a wild jungle girl. Whereas previous
Boll movies could be considered so bad they’re good, ITNOTK-ADST is
just bad.

• Do I really need to tell you what Jesse James Meets Frankenstein’s Daughter
is about? It doesn’t matter. It was made by the Uwe Boll of the 1960s,
William Beaudine… and between that and the title, that should say it all.