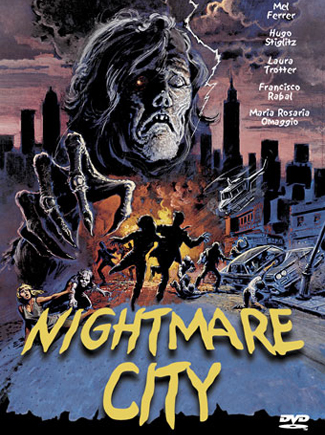 If you live way down South or in the Southwest, then this is the weekend you get to head out to theaters to see Rogue, the best giant-crocodile-run-amuck movie since 1980’s Alligator. If you live elsewhere, you’re on a horror movie diet until Tuesday, when these titles get dumped to disc.

See No Evil (2006)
In the early ’60s, when most of the British public were out buying the new Beatles albums or watching Help !, Ian Brady and Myra Hindley were murdering children out on the Manchester moors. One of Great Britain’s most infamous serial killing cases is immortalized in this award-winning made-for-TV two-part serial, the first movie ever based on what are known as the Moors Murders. Instead of focusing on the murderous couple, we zoom in on David and Maureen Smith, Myra Hindley’s sister and brother-in-law, whose testimony sent the S&M, Nazi-porn-loving murderers to prison for life (where Brady remains to this day; Hindley died in prison in 2002).

Knock Knock (2007)
This old-school slasher flick is aimed squarely at horror fans and it makes the case that the old days sucked. Shot on Staten Island, a group of teens are given the stalk-and-slash treatment circa 1983. There’s a gibbering, drooling school janitor, a prank-gone-wrong that must be avenged, a string of gory knifings, and a grizzled old cop trying to piece it all together.

There’s nothing in this movie — not a line of dialogue, a character, or set-up — that hasn’t been seen in at least 12 other movies; the actresses are so wooden that every line they utter feels like a
prelude to a porn scene with the pizza boy, and the male actors can’t
even cuss convincingly. The director may think he’s paying homage to the movies that he loves, but he doesn’t bring anything new to the table. Knock Knock leaves you emptier than when it started, and can only be recommended to those trying to waste their lives, 90 minutes at a time.

New York Ripper (1982)
What a difference a director makes: If Knock Knock is a throwback to the bad slasher flicks of the early ’80s, New York Ripper is a real, live early ’80s slasher flick that leaves you gawping. Italian sleaze-master, Lucio Fulci, directed this slab of pure, unbridled hatred and misanthropy set in a nightmarish New York City that seems to be rotting on screen as you watch it. It’s not the plot that sticks with you, it’s Fulci’s vision of Manhattan as a simmering cess pool of sleaze and sin. His infamous Zombie was a mutated response to George Romero’s Dawn of the Dead , making New York Ripper his twisted callback to Martin Scorsese’s Taxi Driver . While it doesn’t even approach the level of its inspiration, it makes up in volume what it lacks in finesse. If you’ve got a soft spot for the Rotten Apple back in its Death Wish days, then this one’s for you.

Nightmare City (1980)
Just as Lou Reed is considered a musicican’s musician, Italian director Umberto Lenzi is a hack’s hack. In Nightmare City,
he shows you why. An airplane lands. The police surround it. Silence.
Tension. The door opens. More tension. Suddenly a bunch of zombies
sprint off the plane with axes and machetes and start hacking the
police to death, drinking their blood before over-running the city. The
budget is thin, the make-up for the zombies makes them look like they
have burnt meatballs for heads, and they all wear natty little sweaters
and sports coats, but the sight of the sprinting dead taking over the
world delivers more ridiculous thrills per minute than many better
movies. Slumming American actor Mel Ferrer sums it all up for us in one
of his immortal, boneheaded lines, “Return to base. Your mission is
useless.” Useless, but amusing.

Paranormal State (2007)
This
three-disc box set of A&E’s entry in the ghost hunter reality show
sweepstakes focuses on students at Penn State who run the “Paranormal
Research” club. Over-produced, over-edited and over-serious each show
(about 20 in this set) is a Blair Witch Project
wannabe that’s all build-up and no pay-off. These kids have infrared
cameras, electromagnetic field detectors, sensitive microphones but no
brains. Each episode is a chronicle of grasping at straws: Only a
supernatural entity could have rumpled this bedspread/made this
sound/opened this door/cast this reflection! Or a cat. Either a ghost
or a cat. It’s one or the other. Watch more than three episodes
however, and their super-seriousness starts becoming inadvertently
hilarious. Can you withstand the Paranormal Piano? The  Dorm Room of
Doom? The Demonic Double Wide Trailer? The show reaches its comedic
heights when the investigators take an ax to a perfectly lovely piano
because it has “a bad aura.” Take that, music!

Karaoke Terror (2003)
Truly
the best, or at least the most original, disc out next week, this
Japanese film is as deadpan as they come. At times, it feels as slow as
molasses but hang in there because it’s the only flick you’ll ever see
that combines thrill killers and karaoke into such a
kaleidoscope of cool. A gang of slacker college kids, the Gakis, are on
one side of town; a band of divorced, thirty-something women known as
the Midoris are on the other. Feeling abandoned by society, each group
finds solace performing intricate karaoke numbers at the local club.
One day a Gaki murders a Midori just because he can, and it’s on. The
Midoris swear revenge and the weapons escalate from knives to guns to
rocket launchers and beyond, as the generation gap becomes a free fire
zone. Considered by many critics to be one of the best Japanese movies
of 2003, check out the trailers here and then try to decide if you can ever look at karaoke in quite the same way again.