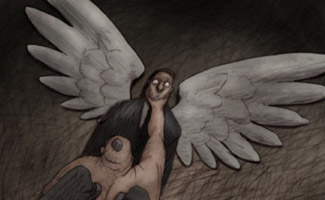 On the verge of the premiere of Idiots and Angels at Tribeca, Oscar-nominated animator Bill Plympton talks about embarking in a new direction and cutting a deal with Tom Waits.

Q: What was your inspiration for Idiots and Angels?

A: All I can recollect is that I was in France about three years ago, walking down the street with a guy. He asked me what my next film was. I said, “Some a–hole guy who grows wings and he doesn’t like it
because the wings make him do good things.” All that night I started doing sketches and plotting ideas and doing character designs.

A: Hair High was a much bigger film. The budget was four times as big with big-name actors like David Carradine, Keith Carradine, Sarah Silverman, Dermot Mulroney and Martha Plimpton. Hair High was animated cell; this is just pencil on paper. If I made a mistake with the pencil, I’d just erase it and redraw it. It was the lowest of low tech, kind of like guerilla-style filmmaking.

Q: What made you opt for that technique?

A: Well, I’ll be honest with you. I really thought Hair High was going to be a big, smash hit. And it didn’t perform at all. We got some awards and good festival play. I expected some big pickup and lots of money. It didn’t happen. So I said, “Screw that. I’m going back to my small film roots to keep the budget as low as possible and make a much more personal film.”

Q: Can you tell me about the look of Idiots and Angels?

A: It’s colored digitally, but it’s a very subtle, monochromatic coloring. It feels like black and white, but there are sepia tones and some color. The drawing was incredibly easy, a joy to do. But in post production, we had to go in there and shade a lot of areas. Every frame had to be reshaded and colored. And then you
had to put the highlights in the nose, lip and eyes. That takes a lot of manpower. We worked ’round the clock to finish it for Tribeca.

Q: This guy who sprouts wings feels kind of like Bukowski.

A: Very much so. He always has a briefcase — you think he’s going to work — but all he does is hang out in the bar all day long. He doesn’t care about humanity. He’s just out to make money to drink.

Q: Why does he sprout wings?

A: No one knows. He doesn’t know. He wakes up one morning and sprouts small wings that grow. It’s kind of Kafka-esque: Woke up one morning and he’s an insect. People start making fun of him and laughing. The wings make him do good things — like retrieving money and giving to people. He hates the wings and tries to shave them off with his shaver. A few months later, he takes a chainsaw to them. They keep growing
back.

Q: Since there’s no dialogue, music must’ve been important.

A: Very important. It’s almost like an MTV musical. We use Pink Martini and Tom Waits, among others like Larry Campbell, who plays with Bob Dylan and Emmylou Harris. Once you put a song up to the animation and it clicks, it’s just magical… I probably shouldn’t be saying this, but what the hell. As I was drawing the film, I really heard Tom Waits’ music because the film is very dark with Barfly kind of visuals. I know Jim Jarmusch, so I called up Jim and sent him a clip. He liked it a lot and passed it on to Tom Waits. Tom knew I wasn’t a Hollywood production and didn’t have a huge music budget. I said, “I’m paying for
this out of my pocket. Can you give me a break?” And he gave us two songs for scale. One is used when the evil guy comes onto the waitress in the bar. The other is used for a dramatic death scene.