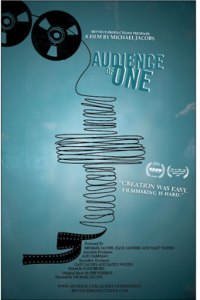 To film a sci-fi epic, you have to have vision; in the case of Pentecostal pastor Richard Gazowski, it came straight from heaven above. Ordered by God to make the movie — which merges the biblical story of Joseph with battle-droids — Gazowski spent over $50 million to shoot his doomed masterpiece, and in the process became the subject of the new documentary Audience of One.

With the looming presence of Gazowski himself frantically pulling the puppet strings in the background, you can tell from the trailer that every cringe-worthy moment and ridiculous mistake is laid bare in Audience. Whether or not you believe that it was divine intervention that kept the crew from being evicted despite being five months behind in their rent, it’s fascinating to watch adults with millions to spend laboring over a movie half as good as the Raiders of the Lost Ark re-make that those three kids made back in the ’80s.

Audience of One is currently touring festivals and looking for a distributor. That gives me plenty of time to re-watch the trailer and make sure none of these people is Christopher Guest in disguise…