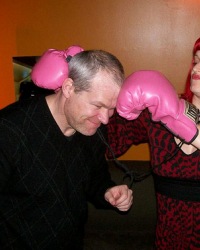 Those who have just about had it with Uwe Boll’s bottom-of-the-barrel video game adaptations and Ed Wood-esque stabs at horror movies will perk up at the following news: In an interview with FearNet, Boll acknowledges a petition that’s being passed around demanding that he retire from filmmaking, and declares it would take a million signatures to sway him. That was just a mere four days ago, when the petition had only 18,000 names on it. Today the figure teeters at 100,000. At this rate, it will take just a few weeks to get the necessary signatures to call Uwe’s bluff.

The interview also contains a few choice insights into the mind and humor of the little-understood director and ardent PETA supporter, such as his rationalization about filming a scene in which a cat is used to muffle a gunshot: “Oh, it was fake; it was made out of a puppet… The real cat was not really doing on set what we wanted so it took a long time to shoot the scene. He adds, “And it was actually one thing from the game that I really liked.”