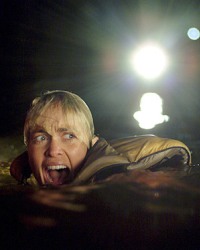 We’d have loved to review the killer croc movie Rogue, but the sketchiness of its release made that impossible. Instead, here are the early reviews from those who have already gotten to feast on Greg MacLean’s follow-up to Wolf Creek — surprise, it’s better than you thought:

“More restrained than his no-holds-barred psychothriller hit “Wolf Creek,” helmer Greg McLean’s sophomore outing wants only to be a good B-grader and succeeds with regular scares and a monster worth the ticket price.” — Richard Kuipers, Variety

“Some horror junkies won’t applaud the lack of gore, but the market is flooded with grade B thrillers which all but splash us with faux blood. Who needs severed limbs and entrails when you’ve got genuine thrills and a score that sounds imported from a movie with quadruple the budget?” — Christian Toto, Washington Times

“McLean’s monster is an ultra-realistic and unnerving design which does its job of scaring the audience half to death, and does it well.” — Carmine Pascuzzi, MediaSearch

“Perhaps McLean forgot that his audience are cinematic carnivores, and
they won’t appreciate the sudden menu switch from steak to salad.” —
Luke Buckmaster, In Film Australia

“Rogue delivers no more or less than it promises,
and it does so the way those ’50s irradiated-beasts directors wish they
could have done so realistically had CGI and good animatronic puppetry
been around.” — Drew Turney, Dark Horizons

“It’s Greg McLean’s triumph, a cohesive piece of writing and
direction that finds exactly the right mix of commercial and creative
balance to bring in a movie that can charm and scare us by turns, that
offers credible characters and an unmistakable Australian ethos.” — Urban Cinephile

“Mclean has smartly stuck with the basics, and recognised that in
this type of story simplicity is best. ” — Christopher Symonds, Reel Reviews