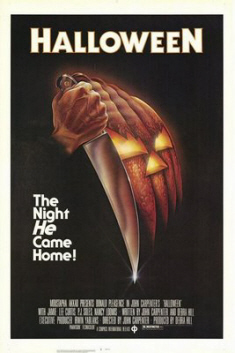 There are certain
films which can be identified without hearing a word of dialogue, without a glimpse of actors or opening credits, or — in the rarest cases — without even having
to be in the room. John Carpenter’s simple, synthesized score in Halloween
let’s anyone within earshot know that something bad is about to happen.

Already established as a director, Carpenter
didn’t just sit down at a synthesizer and tickle the keys. A life-long musician
and the son of a classically trained musician, he realized by creating his own
score he could create a unique atmosphere. Carpenter decided to use an
irregular 5/4 time signature — meaning there are five quarter beats in a
bar of music — for Halloween’s
Theme – Main Title. With this decision, Carpenter not only composed
music that sounds different but music that also feels different. Scenes that seem safe and familiar are unsettled
by music that is more stressful on the ear.

The music and the visuals in Halloween are so effectively intertwined
that even when separated, the music leaves the viewer with a lasting impression.
Maybe that’s why the film continues to be such a classic: As soon as you hear that simple, repeating melody, you’re instantly scared.