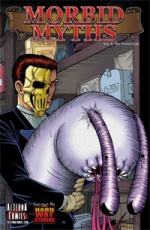 • Geeks of Doom has a new comic review: Morbid Myths Vol. 1: The Collection. Read it “close to the fireplace and preferably with a fierce wind whipping about outside.”

• Dan Aykroyd believes in ghosts but he can’t believe, “The Onion Head is now a cartoon star.” Watch Making of the Real Ghostbusters.

• The remakes are coming. Den of Geek has compiled a list of 7 shots horror filmmakers should never be allowed to use again. Please, steal the plot, not the camera angle.

• Have oil companies found a friend in horror? Filming starts this week on Neil Marshall’s Hybrid and, according to Variety, the plot involves a female mechanic spending a very scary night with a hybrid car.