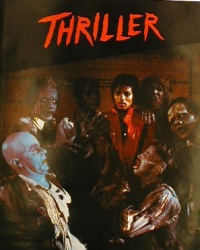 • Darren Lynn Bousman is worried about his new film Repo: The Genetic Opera. “I think right now, the problem with this movie is that people are thinking of it as meat and potatoes. It’s not. It’s sushi.”

• In case you missed it: Cookie Monster Searches Deep Within Himself and Asks: Is Me Really Monster?

•The role of slasher mom Pamela Voorhees has been cast. Nana Visitor (she usually does scifi) told ScreenGeeks she’ll play the part in the Friday the 13th remake.

•Evil Dead: The Musical, based on Sam Raimi’s films, didn’t do well in New York but it’s killing in South Korea.

• Thursday is Thriller, Thriller Night. The Tribeca Film Festival is celebrating the 25th anniversary of Michael Jackson’s epic music video . It might be the best film John Landis ever made.