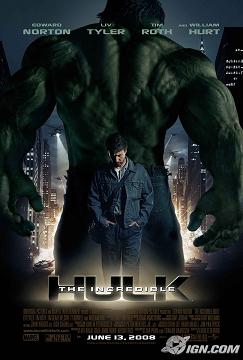 • The Chicago Tribune tells you what makes a good Scream Queen. She must really feel the dire jeopardy before her and possess a “great decibel range.“

• It looks like Demi Moore’s next film may be rife with puppet terror. Burnraku will feature four-foot Japanese puppets in a movie that stars Josh Hartnett on a revenge quest.

• Lars Von Trier’s Antichrist will be a thriller that turns into a horror film. The conceit? All hell breaks loose when a couple heads to a cabin retreat to mourn their dead child.

• There’s yet another new Hulk poster for your perusal (pictured). You wouldn’t want mess with that ripped, green back.

• They’re redoing Ghost in the Shell over at DreamWorks, this time in 3D. That means ugly, monstrous cyborgs coming at your head. Duck!

• Legend is releasing The Barn of the Naked Dead on DVD. Inside, you’ll meet the most sadistic circus Ringmaster who’s ever been seen on film.

• If you’re a zombie fan, you may want to get one of Dan Henk’s zombie tattoos. You have to love the rolled back eyes, and the dripping blood.