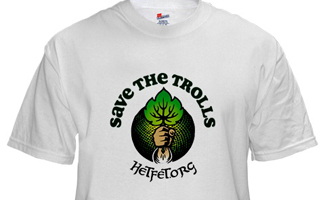 As the entertainment landscape continues to segment, movie studios are increasingly seeking  non-traditional ways to promote their product. Do these so called “viral” marketing campaigns work? And are they even viral?

Hellboy II‘s HETFET.org was announced at New York Comic Con this past weekend as the “viral campaign” for the sequel. HETFET.org is, supposedly, a society for the ethical treatment of fairies and other fantastical creatures that only tangentially ties into the movie. This falls under the category of marketing that ties into aspects of the movie —  rather than revealing aspects of the movie itself, unlike the current The Dark Knight viral campaign (too many sites to list here), which has already provided footage of Heath Ledger’s Joker, and several trailers. Meanwhile, the new Star Trek movie is being teased with “live” cams, showing the Enterprise being built, presumably to count down to the reveal of the ship, or new footage, or… Something else.

How viral are these sites, really?

In order to be viral, they need
to spread quickly throughout the Internet, distributing information to
a populace slavering for more information. The way these campaigns are
playing out, they’re less viral than, let’s say, resident. That is,
campaigns such as these help flesh out the world of the movie —
something that appeals only to those who already know about the movie, or are interested in the movie.

Something like HETFET.org, which doesn’t necessarily involve a call
to action, only appeals to fans who want to have more information when
they go to see Hellboy 2. This doesn’t create new viewers for the movie, it only helps solidify the base. Same for the Dark Knight, and Star Trek. These are all viral campaigns that are not, in fact, viral, since they’re just preaching to the choir.

So how do you make a viral campaign work? You can’t. A viral
campaign, by its very definition, spreads uncontrollably. You can’t
force something to be viral, it just is, or it isn’t. In fact, I’d even
venture to say that a viral campaign that tries to be viral will
succeed in being just the opposite: Dead on the vine.

Until the time when someone determines how to properly viral market
a scifi or fantasy film, you can still enjoy the campaigns; you just
won’t know about them unless you’re already interested.