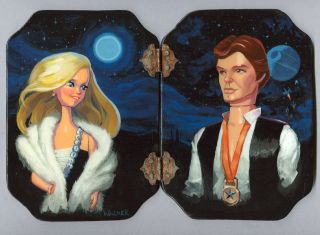 If you were anything like me as a kid, then your toy battles knew no bounds. Transformers fought alongside G.I. Joe, M.A.S.K. vehicles drove over your sister’s helpless My Little Ponies. Anyone who relishes whenever fictional worlds collide will get a kick out of the nutty toy-inspired artwork on display this month at LA’s Gallery 1988.

A few of the pieces are so wrong, yet so right: Gumby fighting giant robots; the Star Wars gang given the Playskool treatment; He-Man as a lumpy, balding middle-aged man; beloved Nintendo characters sitting down to a Last Supper presided over by Donkey Kong. (I always suspected Mario was a Judas.) Others, such as a portrait of He-Man’s wise confidante, the Sorceress, are downright beautiful. And, of course, many of the pieces will have you going, “I used to have that!” (For instance, the painting featuring the blissfully simplistic Battle Beasts. “Wood! Fire! Fire burn wood!” Truer words were never spoken.)