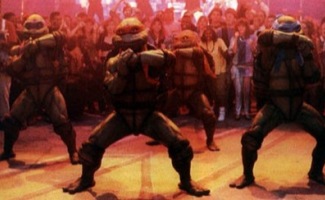 Shoehorning currently popular musical acts into your teen-marketed scifi or action film is a time-honored tradition. Once it was discovered that geeks would buy any merchandise associated with a film they worshiped, a movie’s soundtrack album became an integral part of its release — and that’s how you end up with Vanilla Ice, Bobby Brown, or the Coup De Villes tracking mud through films that have enough problems already. (Big Trouble in Little China, I’m looking at you!)

For your cringing enjoyment, Topless Robot has assembled 11 of the worst offenders, from Margot Kidder’s spacey inner singsong to Madonna’s desecration of Dick Tracy’s dignity. While Seal’s “Kiss From a Rose” in Batman Forever never offended me personally, I’m glad someone has gotten around to calling out the lame music in Spiderman — Macy Gray may have missed this list by a whisker, but Chad Kroeger and Josey Scott caught it right in the teeth. In case memory fails you, all examples are accompanied with video that will return you to the scene of the crime.