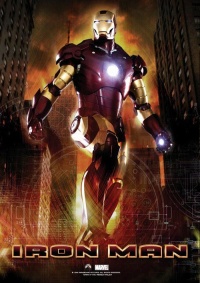 Military contractors have been working on sci-fi inspired super suits for years and they’re finally making some progress. Boy genius Anthony Stark had a head start, but it’ll only be a matter of time before we’re surrounded by wearable robots… And they’ll be invisible.

Australian scientists have joined the race to produce invisibility using metamaterials. (Goodbye Starship Troopers , hello Predator ). It’s not a new idea but last week it got real: The Herald Sun reported that researchers have created a fabric that, when wrapped around a solid object, makes it appear transparent. Now, “The concept has been proved,” says electronics engineer Dr. David Powell. “We’re hoping to see a real device within the next decade.” Turns out, it has less to do with magic (a la Potter’s cloak) and more to do with artificial atoms.

“They are a million times bigger than a real atom, and what happens
is that these artificial atoms do things that real atoms can’t do,”
adds Powell. “They can bend light in strange ways…around the object,
rather than bouncing off it.” In short, light would bypass the covered
object (say, a future man in armor) and, instead, hit the scene behind
it. The background becomes visible while the Iron Man goes unnoticed,
despite the fact that he is very real — and you could walk right into
him.

Can anyone else see the invisible future? It’s right in front of us.