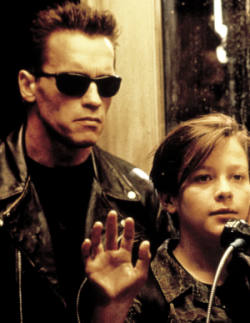 At some point, every actor says it: “I wanted to make a movie my kids could watch.” It’s a Hollywood rite of passage, and more often than not, the impetus behind box office flops like Dustin Hoffman’s Mr. Magorium’s Wonder Emporium. But it doesn’t have to end in disaster: Johnny Depp, for example, parlayed his desire to make kid-friendly entertainment into a critically successful art-house film (Finding Neverland) and a top-grossing blockbuster franchise (Pirates of the Caribbean).

And then there’s the case of Terminator 2: Judgment Day, which in every way was more successful than its predecessor. At $204.8 million, its theatrical gross was a record 434% higher than the original, and it won two of the four Oscar nominations it received (the original received no nominations). So it is perhaps a bit surprising that Arnold Schwarzenegger’s stipulation for this sequel was that his character be more family-friendly. Indeed a great deal of publicity went into promoting the fact that Arnold would be playing the good guy, and after the film was released, a great deal more noted that despite all the violence and mayhem, only 16 people die, all at the hands of Robert Patrick’s villainous T-1000.

I was nine years old when Terminator 2 came out, and that summer my brother snuck me into the theater for my very first R-rated film. In accordance with Governor Schwarzenegger’s wishes for the movie, I present to you my list of Five Kid-Friendly Lessons in Terminator 2.

1. Certain acts of violence are acceptable, and will not result in death. These include breaking a man’s hand and throwing him on a hot stove, picking up a skater punk by the head, and firing a fully automatic railgun into a crowd of police officers.

2. ATM’s are a valuable source for funds that don’t belong to you… but that can become yours. This one is important, because apparently all you need is a stolen card and an Atari Portfolio hand-held computer.

3. It’s okay to fall in love with a computer. I’m not saying I would have had a date before college without this little tidbit lurking in my subconscious, but it probably would have helped.

4. Threatening to inject someone with anti-freeze is a good way to make people give you what you want. Hey kids, it’s a household item and you can use it to get that new Atari Portfolio hand-held computer you’ve always wanted.

5. Liquid metal is fun! So let’s break open all these thermometers and play with the mercury!

Is the Terminator the baddest ‘bot?