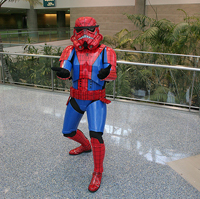 New York Comic-Con starts today here in the city, where most of your faithful Sci-Fi Scanner writers are based. So it stands to reason that you’ll be getting a ton of coverage. What you won’t be getting, and perhaps wouldn’t know if you’ve never attended a Comic-Con (New York, or otherwise), is how many people will be dressed up as Star Wars characters.

There have always been Star Wars comic book adaptations. And now, we’re in the middle of a Star Wars comic renaissance: With no new movies being made, and Lucasfilm essentially in a licensing frenzy, Dark Horse Comics has been releasing titles set in all corners of the Star Wars continuity. So in and of itself, Star Wars having a presence at a Comic-Con is not objectionable.

What is a problem is the amount of Star Wars dress up at Comic-Con.

Sure, there are plenty of Supermen walking around. And there’s a Manga character here and there. But the large majority
of people who show up to Comic-Con are dressed like Star Wars characters… And they’re aggressive about it.

Let’s deal with the first point: There are Star Wars
conventions. They exist and they’re very popular. People go to them
dressed as Storm Troopers, have staged Jedi fights, and attempt to
seduce women with the Force (usually not successfully). I don’t show up
to a Star Wars convention dressed like Batman, so why are they “returning” the “favor?” And in such large quantities?

I’d posit that Star Wars cosplayers tend to like dressing as Star Wars characters a lot
of the time. Comic book cosplayers tend to be a little ashamed of
dressing up, and keep it to the Cons and Halloween. Star Wars
cosplayers, as Star Wars is more of a cultural force, feel
far more comfortable in their Sith outfits in public, and look for any
opportunity to don them. Since it’s not out of bounds at a Comic-Con,
they all show up at the same time.

Secondly, they’re very aggressive about it. Storm Troopers take it
upon themselves to guard celebrities. Jedi take over whole stages and
chunks of the floor to have elaborately staged battles. And not to
sound like an old, grumpy man, but they act like they own the place,
the whippersnappers. Storm Troopers in particular — when a costume covers your
entire body, it allows you to be whoever you want to be. You can actually
become a faceless drone, boldly guarding Stan Lee as he makes the long,
hard trek across the Con floor, shoving fellow convention goers out of
the way.

The worst part: Comic book fans let them. I know I’m tipping the scales here, but Star Wars
cosplayers are the bullies of comic conventions. They essentially cow
the comic book fans into not only accepting their presence, but to also
cede large amounts of precious space to these Lucas acolytes.

I say, no more, my nerd brethren! Let us rise up against this
enormous adversary, and fight back against them! Let us form a
rebellion against this evil empire, and drive them from the cons they
have ruled with a merciless fist for far too long!

And when we do, I totally get to dress like Luke Skywalker. That would be so awesome.