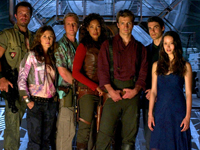 In 2002, Joss Whedon launched his eagerly awaited follow up to Buffy the Vampire Slayer and its spin-off Angel. The show was called Firefly, and was instantly acclaimed by critics as a rich new sci-fi world. And yet, several months later, it was canceled. Thanks to fan lobbying and DVD box set sales, Whedon launched a cinematic follow-up in 2005 called Serenity . Again, the film was critically acclaimed. Again, no one saw it, and the film died in theaters.

Fans of Serenity/Firefly are quick to point out that an avid fan base and a rich sci-fi world is what launched the original Star Trek from “failed” TV series to global franchise. If Star Trek, then why not Serenity?

Well, a couple of reasons:

• The myth that Star Trek was a failure is just that: A
myth. Though it was a low rated television show, it lasted for three
seasons. Just think about that in our current television environment,
where shows are canceled after the first episode. The audience had a
chance to become assimilated to Star Trek‘s vision of the future, something that Fox never allowed Firefly.

• Furthermore, Star Trek had time to explore the universe created by Gene Rodenberry, as well as set the characters over the course of three seasons. Firefly barely had enough time to start developing its characters. As a movie then, Serenity
had to both satisfy fans and appeal to a broader audience, so the
characters were made into caricatured versions of themselves.

• The kind of fandom seen in Star Trek‘s time was
unprecedented. Now, fandom is so specialized that it wouldn’t be
shocking to find that someone, somewhere, is holding a Journeyman convention mourning the loss of time-traveling Dan Vassar. Though Serenity has a very devoted fan base, the only thing that differentiates them from fans of Babylon 5
is the room they’re in at Comic-Con. Oh, and their belief that they’re
smarter than everyone else, based on the fact that they like Joss
Whedon.

• Which brings me to the next point: It’s a little unclear whether Serenity
fans are actually fans of the series and movie, or if they’re just fans
of Joss Whedon. Whedon fans have a stalker-like intensity towards the
man, and a vampiric need to suck more stories out of him. There’s a
part of this that I think has less to do with their love of Serenity
than their need to get more stories from Whedon, and the only frame of
reference they have are the worlds he has already created. Hence the
focus on Serenity.

• There has never been a phenomenon quite like Star Trek; chances are, there never will be. But one of the things that caused and differentiated the growth of Star Trek was that it was relatively organic in nature. Encouraged by the production studio, sure. But it’s not like someone looked at Star Trek back in 1969 and said, “You know? I think we can get 11 movies out of this.” With Serenity, this po-mo knowledge of Star Trek
both helps (it provides a road-map for the franchise), and hurts (slim chance that Serenity will even come close to replicating Star Trek‘s success).

Just to give a little ray of sunshine here at the end of a relatively dark series of statements, Serenity
is creating a great deal of good. In particular, in the past two years, “Can’t Stop the Serenity” screenings have raised over
$160,000 for Whedon’s favorite charity, Equality Now. Starting in June,
they’re starting a 55-city tour of the film to raise more. If the tour also exposes more people to Whedon’s
potential franchise starter? Then, I guess, that’s pretty shiny, too.