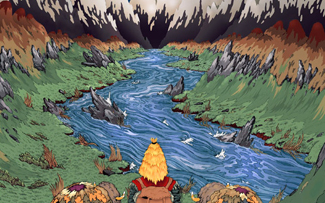 • Here’s hoping Where the Wild Things Are looks even half as cool as Bjork’s gorgeous new video. (A 3D version will be released soon on her official website .)

• Could Brad Pitt be looking to be the next Indiana Jones by producing and possibly starring in Lost City? “Col. Percy Harrison Fawcett and the Lost City of Z” just doesn’t have the same ring to it.

• Is there anything more surreal (and disturbing) than famous Vietnam-era photographs recreated with Star Wars Lego? Okay, maybe the Peanuts gang as Watchmen characters.

•Jayce and the Wheeled Warriors, easily one of the weirdest sci-fi cartoons from the 1980s, is finally available on DVD. Check out the trippy theme song. Yes, the bad guy is a giant plant.

• Stan “The Man” Lee is teaming up with Disney to conquer the media world. Excelsior?

• The Latino Review reports that G.I. Joe screenwriter Stuart Beattie is writing the long-delayed Halo film. If it didn’t sound so plausible, we’d be calling “April Fools” on this one.