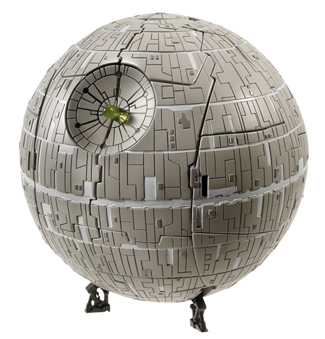 Bearing an uncanny resemblance to Saturn’s moon Mimas, the Death Star was the super-weapon of the evil Emperor Palpatine in the Star Wars films: A planet-sized ship that could boil oceans, vaporize continents and explode small suns. An unassailable force of oppression, capable of terrorizing political opponents into complete submission — there’s a reason Emperor Palpatine opted to dissolve the Galactic Senate at the precise moment of the Death Star’s completion: Why bother giving face time to a bunch of milksop representatives’ grievances when you can just nuke their homeworld? United Nations, take note.

Of course, the Death Star didn’t last, thanks to Luke Skywalker and
the Rebel Alliance’s triumphant victory over the Empire at the end of A New Hope.
But before it was blown into space dust, it was a hell of a weapon. The
Death Star was 120km in diameter, but thanks to its mass, the ship
possessed the gravity of a planetoid 10 times as large… a neat little
in-universe explanation for the Death Star’s Earth-like gravity in a
franchise known for cavalierly flipping off scientific plausibility.
Linked banks of 123 hyperdrives meant the Death Star was no where near
as sluggish and non-maneuverable as it appeared: It could zip across
the galaxy, blow up the planet, and then zip back into Coruscant’s
orbit before the sudden reconfiguration of orbiting gravitational mass
caused the first tidal waves. The Death Star was one bitchin’ ride. But
what about its weaponry?

In A New Hope, Vader cautions the Death Star’s commander,
Grand Moff Tarkin, from getting too cocky about his new weapon. “Don’t
be too proud of this technological terror you’ve constructed. The
ability to destroy a planet is insignificant next to the power of the
Force.” Mere braggadocio from a melted old man whose own force powers
tapped out at sensing the presence of old men. Calculations of the
amount of power it would take to blow up a planet like Alderaan suggest
that the Death Star was capable of emitting a million times more energy
in a single, 10-second blast than our sun produces in a week.

So where did it all go wrong? How did a bunch of hicks, fatties and
farmboys manage to destroy a weapon more powerful than a million suns?
Imperial arrogance. A small child could point out the obvious flaw in
any weapon design where the only unarmored point is a torpedo-sized
exhaust port that pass directly to the engine room, but that’s not such
a big deal as long as your shields keep out X-Wings. If no X-Wings get
through, there’s no problem, right? Except that the Death Star’s
shields only worked in keeping out ships larger than an
X-Wing. Only a contractor being funded by the unlimited budget of a
stupidly arrogant bureaucracy could make a mistake like that. In fact,
the Death Star entry on Wokieepedia wryly notes, “This fatal design flaw resulted in protracted litigation between the Empire and numerous military contractors.”

There was, of course, a second Death Star, but the less said about Return of the Jedi,
the better. Ultimately, George Lucas’ creation of a planet destroying
supership influenced many other scifi planet killers, like the Borg
Cube from Star Trek — the Death Star gone square — and the planet-eating Transformer with the voice of Orson Welles, Unicron. In fact, Unicron is so influenced by the Death Star that the Star Wars franchise made their own little nod to him by way of this Star Wars / Transformers Death Star toy.

And who does the Death Star Transformers toy transform into? Who else but another famous Star Wars ‘D?’ “D is also for Darth Vader, wheezing in his shell.” as every Yavin schoolboy learns.