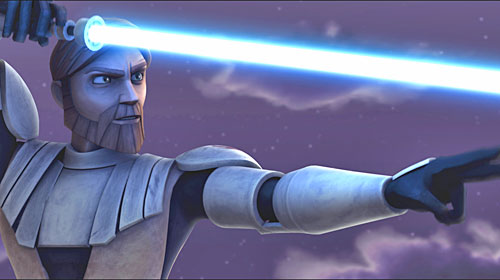 Back when it was just an off-hand reference made by Princess Leia in Episode IV , the idea of the Clone Wars sounded extremely cool. But then George Lucas had to go and make Episodes II and   Episode III and turn the whole thing into a boring mess. But there’s a ray of hope, thanks to the new leaked trailer for Star Wars: The Clone Wars, coming to theaters this August. Yes, it’s basically a glorified pilot for the Cartoon Network animated series debuting this fall. But Jabba’s in it, R2 does his scared whistle thing, and best of all: Anakin’s chopped off the rattail.

If the trailer gives you a slight sense of deja vu, that’s because the Clone Wars were animated once before in 2D for Samurai Jack creator
Genndy Tartakovsky’s 2003 Cartoon Network series. And you can rest assured that Lucas will revisit the Clone Wars saga again in the upcoming live-action Star Wars TV show. (The Clone Wars are just one Ken Burns documentary away from serious overexposure.)

Still, the new trailer packs more action into two minutes than Lucas put into most of Episode I.
And while you might not care about that Jedi with the tentacle hair or
the new female Jedi recruit who plays a major part in the TV series,
Yoda is present in full dramatic glory and there are plenty of
lightsaber battles. And, uh, did we mention that Jabba’s in it? (Now,
here’s hoping for an animated Salacious Crumb.)