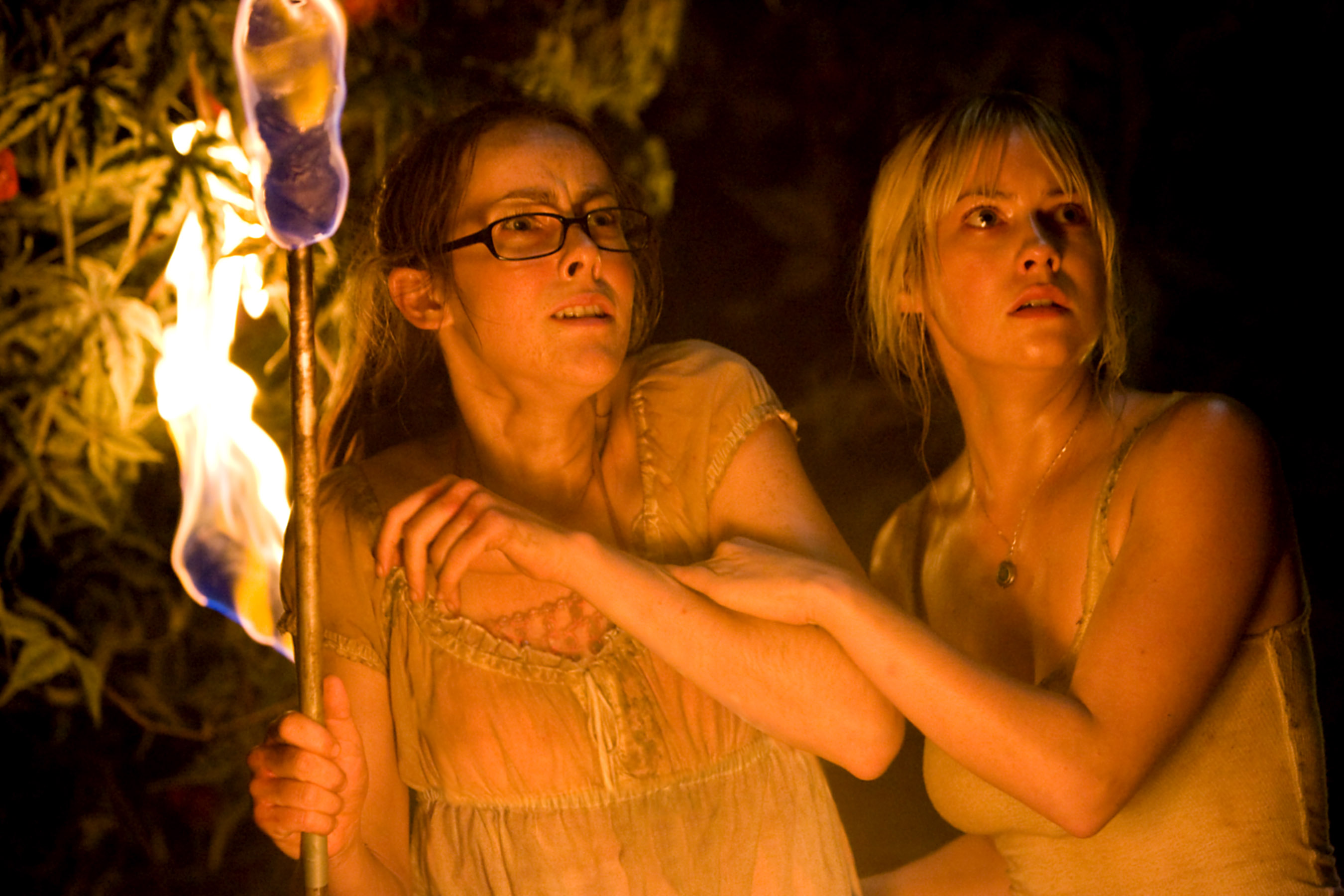 The Ruins, a movie that will leave you with a deep and everlasting fear of… shrubbery.

This flick is the Charles Bronson of horror movies: It ain’t pretty,
but it hits hard, it hits fast and it takes care of business.
Dreamworks isn’t screening it for the press which is a sign that they
would have preferred the movie to resemble Jude Law or George Clooney
or, you know, someone classy. But if you like your horror raw and
dirty, then you know Bronson’s the only way to go. The set-up sounds
like the beginning of a bad joke: Six tourists walk into a ruined
temple: a German, a Greek, and four Americans who keep taking off their
clothes. A friend’s brother is working at an archaeological dig and
they make the mistake people in horror movies are constantly making —
they decide to leave their poolside lounge chairs and do something
cultural. When someone in an American horror movie decides they want a
little local color, you can rest assured the color will be arterial
red. Before you can say, “Do you speak English?” they’re trapped in the
ruins, unable to escape and face-to-face with something horrible and
herbaceous that wants to use their buff, gym-toned bodies for
fertilizer.

In 2005-2006, a fistful of New York Times-approved authors put aside their literary fiction and turned out some freaky horror books. There was Brett Easton Ellis’ Lunar Park, Chuck Palahniuk’s Haunted and Scott Smith’s The Ruins. Smith had previously written A Simple Plan, a book that began as a “Hey, Ma! We found a bag of money!” thriller and finished knee-deep in blood and carnage. It took him almost ten years to write The Ruins, and critics weren’t very nice about it. Slate said, “…it’s worth pondering about the purpose of all this carnage,” and the New York Times called it “…a silly, bloody farce.”

Smith also wrote the screenplay of The Ruins. For the movie, he kept the book’s stomach-flipping gore, but reined in its windy psychologizing and goofy supernatural conceits. The result is a movie that’s a lean, mean horror machine. For fans, what’s best about The Ruins is that the characters are smart. They don’t run around like chickens with their heads cut off, putting themselves in dangerous situations. Instead they sit down, try to think things through and make decisions. That the decisions turn out to be bad ones (never amputate your leg with a dull knife), well, that’s what makes it a horror movie. Like Hostel , this is a flick that’s irredeemably sick and designed only to freak you out, and you’ve got to love it for the courage of its depraved convictions. At 91 minutes, it moves fast, with only occasional pauses to ratchet up the tension, or to relish someone freaking out about the seeds beneath their skin.

Dreamworks’ decision to keep The Ruins from screening for the press means they can’t tell the difference between an accomplished gutcruncher and the dozens of J-horror knock-offs and spineless horror remakes glutting theaters. Luckily, even if they can’t tell the difference, the audience can. Comparing The Ruins to the horror movies of the last six months is like comparing a big, juicy plate of spare ribs to a Spam sandwich. By the time this flick is over, you’ll be scared of the shrubbery. And of camping. And of vacations. And of hot frying pans. And flowers. And Mexico. And Mayans. And ruins. And other people. And bright sunny days. And going outdoors…