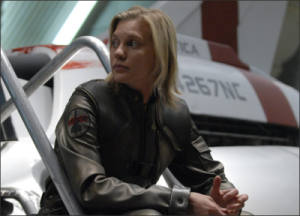 It’s been over a year since Bob Dylan ushered four new cylons into self-realization and a long-lost Starbuck returned from the dead — and the wait has been frakking unbearable. The die-hards among us were given a small fix in November with the stand-alone movie Razor, which was serviceable as canon but otherwise only reminded us what we’d been craving for so long. Finally, Ronald D. Moore’s pitch-perfect space opera Battlestar Galactica returned last week with the premiere of its fourth and final season. If “He That Believeth Me” disappointed, it was only in the fact that it didn’t live up to the impossible task of topping the third season finale, which was executed with such precision.

Right off the bat, the opening credits let us know that Moore is steering the plot towards a conclusion. No longer are we teased with the notion that the Cylons, having rebelled, evolved, and copied, now have a plan, but with a promise that one Cylon remains and will be revealed. Of course, that promise only prompts more questions, most importantly how that revelation will serve to resolve the plot. Is the Cylons’ central imperative no longer paramount, or is it now somehow indelibly linked with the Final Five, who are obviously not of the same batter as their One through Seven bretheren?

Visually, the opening sequence was spectacular — a dogfight that easily tops anything the show has come close to in the past, which I hear is a direct result of the writers’ strike giving the F/X gurus more time to play. The battle also resulted in one of the more intriguing moments of the episode: When the Cylon Raider turns to scan Anders there’s a moment where his eye flashes red. The assumption here is that it scanned him, recognized him as a Cylon and consequently called off the attack. But I can’t help but wonder if the flash was not a scan, but rather some sort of activation. This could mean that the whole purpose of the attack was to turn Anders into a sleeper agent. Moreso than the other three (even Tigh who had that disappointing dream sequence), I will have my eye on Anders.

In the aftermath of the assault, we finally get to the question everyone has been wondering: What the frak happened to Starbuck? Not surprisingly, we still kind of wonder that by the hour’s end. But we are told that she passed out and woke up orbiting Earth. Or did she? Kara tells Roslin and the Adamas that she woke up orbiting a planet with a yellow moon — the picture on the table seems to verify that fact. Erm, last I checked our Moon was a bit more grayish. More intriguing is her brand-spankin’ new Viper, which seems to suggest the whole situation has been staged. Starbuck must be the final Cylon then, right? Entirely too obvious, methinks. Like Baltar, I think Kara Thrace and Her Special Destiny are connected to the Cylons, but that does not a glowing-red spine make. There’s also Razor to consider, in which the Hybrid told Kendra Shaw that Kara Thrace was the harbinger of the apocalypse and would lead humanity to its end. While that could mean she is the harbinger of a Cylon apocalypse and humanity’s end is the end of its journey to Earth, I’m not so convinced. She may very well lead humanity to Earth, but I don’t believe she knows where it is yet.

Turning to Baltar, we’ve arrived at what I consider to be the weakest part of the episode. Not that I have a problem with Gaius finding a coven of sultry girls to worship him, but I am a bit perturbed that there happens to be a room on Galactica that everyone just forgot about. If someone can explain to me the sense behind entirely ignoring rooms when you’re constantly on the lookout for Cylon sabotage, you’d make a more adept Commander than me.

That said, I am rather intrigued by Baltar’s transformation from Jesus look-a-like charlatan to devout believer. The show has always towed the line on whether any of the superstitions of religion bear real-world weight — it accomplishes this by having these “acts of god” affect the faith of individual characters rather than the events themselves. Had this child died, would I be any more or less convinced that the One True God exists? No, not really. But Baltar is finally convinced, which I think makes his character a lot more interesting than the goofy, somewhat witless villain we’ve come to know and love. For the first time, he’s beginning to act out of something other than self-interest, and embrace his role as The Chosen One.

Less willing to embrace their roles are Apollo and the four newbie Cylons. The former tells Admiral Dad he’s got a job offer with the government, though how he managed that in the course of two hours is beyond me, especially given Roslin’s current feelings towards him. The latter group meanwhile spent the entire episode giving each other ominous glances every time someone said, “The Final Five could be standing right next to us,” which was once every thirty seconds by my estimation. When All Along the Watchtower is blasting, those looks gave me chills, but now they seem too great a wink at the audience.

Like any good season opener, Battlestar Galactica left us with more questions than answers. Who or what is Starbuck? Who is the last Cylon? Does Baltar have an angle, or has he turned a new leaf? Is Roslin really shacking up with Admiral Adama?? Thank the gods this time we only have to wait a week to find out.