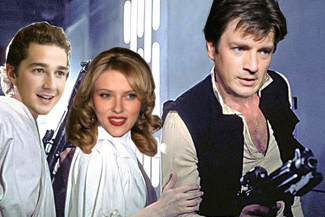 The other day, a friend and I were watching Empire Strikes Back on his massive, HD television. The movie looks great, sounds great, and yet… There are certain elements even in the best Star Wars film (which Empire is), that are unavoidably bad. This led to a rather heated discussion about the quality level of the first film, which led to me posing the following question: Would you see a remake of Star Wars?

My friend, without even thinking about it, said, “absolutely not,” but as for me, I’m not so sure.

There’s certainly magic involved in the first Star Wars
film that was a combination of new special effects, the dawn of the
Summer Blockbuster, and a fresh young cast and director who had
something to prove.

That all being said, think of what could be done with modern special
effects; and I’m not talking about Lucas painting over work he’s
previously created, I’m talking about an entire remake of the first
movie. There’s also something to be said for getting uniformly good
actors, a director who cares about said actors, and a script that’s put
through several levels of polish.

Skipping over (for the moment) the idea of a shot for shot remake,
I’m talking about recasting all the parts, starting the script from
scrap, and getting a quality director to redo the franchise from the
start. Think of J.J. Abrams rebooting Star Trek, or, to use something that’s already come out, Christopher Nolan on Batman Begins …
Essentially taking a franchise with a huge amount of mythology, a huge
amount of back-story, and restarting it from the beginning.

Obviously, even with a quality record, a strong directing, acting,
and writing team are no guarantee of a quality product. But the larger
question in my mind is, would people even want to see it? Would anyone
be interested in a brand new Star Wars?

I’m going to go out on a limb and say “yes.” I would guess that you,
readers, will have the gut reaction of “no way!” but at the end of the
day:

– You’re going to be curious.

Just, for the moment, push past your initial fanboy anger, and search your feelings… Just try and imagine a new Star Wars
movie opening, and you saying, “No thanks, I’ll pass.” There’s a
wookie’s chance on Mustafar you’re not there opening day, even out of
simple curiosity.

Am I saying this should happen? Not necessarily. I’m not a big fan
of remakes, in general. But will it happen? At some point, absolutely. Star Wars
is too big of a franchise to go without another theatrical release. It
may not be through Lucas, and it may not be in the next 20 years, but
at some point in the future, there will be another Star Wars film. It may be a continuation of the franchise, but my bet is, it’ll be a reboot. And I’ll be there with my jet-backpack on.