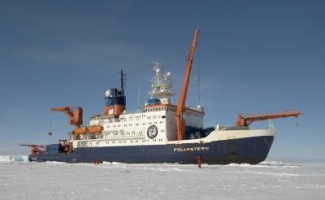 Don’t be fooled by the 3D effects, there’s nothing real about this summer’s Journey to the Center of the Earth. It might be faithful to the novel by Jules Verne, but his 1864 vision of a life below the surface has not panned out. And although scientists still have a lot to learn about the core, it’s clear you can’t spelunk your way there.

Of those that tried digging their way down, the Soviets were the most successful. Their Kola Superdeep Borehole, which took 24 years to make and stretches over seven miles, is the deepest hole drilled by mankind. It was stopped when they reached temperatures of about 180°C (356°F) — the maximum heat tolerance for the drill, nevermind human life.

The latest news about the earth’s insides comes from University of Houston geologist Jonathan Snow, who found success using a different approach.

His journey to the center of the earth started at the North Pole
and was facilitated by the 400-foot-long icebreaker pictured here. His
crew was exploring the Gakkel Ridge, a location with the least volcanic
activity and most mantle exposure ever discovered.

The team
scooped up thousands of pounds of rocks from the ocean floor and,
without having to drill below the surface, Snow realized he’d found
mantle rocks that are two billion years old. “I just about fell off my
chair,” Snow said. “We can’t exaggerate how important these rocks are —
they’re a window into that deep part of the Earth.”

The
work took several years and millions of dollars, but the information
gathered is changing the way scientists think about the mantle’s
formation. It also opens the door to finding out about early earth
events by studying the surprisingly ancient rocks preserved in that
layer.

Snow might have found a window but don’t expect
anyone to travel from Iceland to Italy via the inner earth (as did
Verne’s nutty professor) anytime soon.