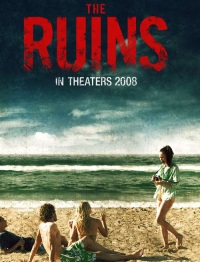 Critics were guaranteed to grouse about The Ruins, but even a decently scary movie (and this is one) has its ups and downs. In this case, the downs are more entertaining to read:

“No matter how good your special effects crew, no matter how strong your cast, your movie is going to live or die on the whim of some shrubbery.” — Rene Rodriguez Miami Herald

“The Ruins could have been the most politically provocative horror film since Bug was released last year. It settles for gore and pain instead.” — Matt Zoller Seitz, The New York Times

“The Ruins is lumpish, static, and obvious. It’s a
gringos-go-home cautionary fright flick done in the spirit of a cheap
’50s horror movie, except that it leaves you longing for the competence
of grade-Z studio-system trash.” — Owen Gleiberman, Entertainment Weekly

“The vines themselves are a stoner’s worst nightmare. This weed wants to smoke you.” — Wesley Morris, Boston Globe

“I guess the moral of The Ruins is: don’t send Jena Malone to do Kurt Russell’s job.” — Pete Vonder Haar, Film Threat