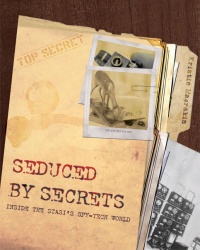 The Get Smart remake hits theaters June 20, and that means gadget guy Maxwell Smart (Steve Carell) will be back to make us laugh as he saves us from KAOS. It’s safe to say the spoof will use spy-tech gadgets as gags, with only a passing nod to the real methods used by spy agencies. For that we turn to Kristie Macrakis, science historian and author of Seduced by Secrets: Inside the Stasi’s Spy-Tech World.

Macrakis says there are real life Qs beyond the world of James Bond. “The difference is that they don’t ask for gadgets to be returned in pristine condition,” she says. “You want to get rid of this stuff.You could land in court if you’ve got all these spy gadgets.” She agreed to give www.amc.com a reality check.

Shoe Phones
“The closest I’ve come to a shoe phone is a shoe concealment — that is a shoe with a secret compartment to hide spy materials like small cameras, codes, etc.”

Umbrellas as Weapons
“The most chilling umbrella killer during the Cold War was the Markov
umbrella — an umbrella outfitted with a release mechanism. A dissident
was poked with the umbrella and the mechanism released a pellet of the
deadly ricin toxin.”

Macrakis‘ Book
“The
History Book Club has called it an eye-opener: I reveal secret after
secret. Spy agencies hate it when you reveal their methods and sources
and they guard them closely. For the first time, we reproduce invisible
ink formulas and reveal the methods used to develop enemy secret ink. I
expose secret programs used to track spies and enemies of the state
using radioactive isotopes or smell. I also connect
gadgets to people and to specific cases. In the communication chapter,
I show how gadgets led to spy arrests and were used as evidence.”

Favorite Spy Fiction
“Ian Fleming’s From Russia With Love
is my all time favorite… poor Ian Fleming he didn’t get credit where
credit is due. The way he depicts SMERSH — all that stuff existed. He
had experienced World War II and basically brings in a lot of stuff he
learned from WWII spying into the Cold War period.”