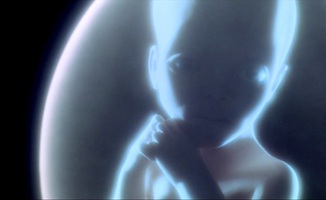 Forty years ago ape-men threw bones at a monolith, kicking off a love affair that would span generations. Kubrick’s classic 2001: A Space Odyssey is many things to many people: a tense thriller, a dystopian fable, a leftover hallucination from the 1960s.

Of course, there are those who don’t know what to make of it, who watch and wait and watch again, hoping to understand. An unexpected benefit of 40 years of fan-worship and film criticism, however, is that it only grows easier for new audiences to explore the film. Movie City Indie, for example, has assembled a dazzling collection of notes, reviews, and trivia about the film that will have you throwing an impromptu screening party of your own to celebrate the occasion.

If you’re still left scratching your head trying to figure it out, then how about some Cliff’s Notes? Kubrick 2001: The Space Odyssey Explained is a ten-minute animated film that lays it all out in plain terms, leaving little to the imagination. Finally you’ll know what Kubrick was trying to say.