Last Thursday I opened my mailbox and found an unbelievable bounty: Three credit card offers (I’m pre-approved! How awesome am I?), an envelope full of Valpak coupons (Hello, 20% off at the dry cleaners!), and a screener copy of the April Fool’s Day remake. While I totally dig getting free movies, I can’t say I’m terribly excited about the new April Fool’s Day. The 1986 original is one of my favorite slasher flicks and I’m simply not much interested in seeing it re-done — although having seen the trailer, it appears that the new version has very little to do with the old one.  Eventually I’ll have to watch it, I know. I’m pretty sure that as a horror blogger I’m morally obligated or something.

Remakes. Man, we horror fans can’t get away from ’em. Sure, they’ve been around forever — there’s Nosferatu (1979) and John Carpenter’s The Thing (1982), to name a couple of great ones — but in the last couple of years they’ve multiplied like cockroaches. Every time you squish one (that is, every time the reviews stink and audiences ignore flee), and you think that’s that, five more suddenly appear to take its place. Try as you may, they simply can’t be annihilated for good. The horror remake will undoubtedly be standing alongside Cher after the world explodes in a nuclear holocaust. 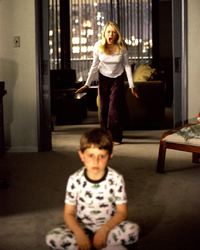 The current wave kicked off after the success of Gore Verbinski’s The Ring . The Western world realized — Wow, they make horror movies in Asia —
and the market became glutted with remakes featuring ghosts with long,
wet hair. Some of these are decent films in their own right; I’ll admit
I was introduced to J-horror via The Ring (which I love), and The Grudge is almost as heebie-jeebie inducing as Ju-On .
Most, however, don’t manage to claw their way out of the well. Despite
the lukewarm box office of films such as these, the J-horror remakes
keep on keepin’ on: This Friday sees the release of Shutter, and there’s A Tale of Two Sisters slated for later this year.

Hollywood isn’t strictly looking overseas for films to update
anymore: Now the slasher era (roughly the late 1970s to mid-1980s) is
providing fodder for the remake machine. We’ve seen everything from
total flops (When A Stranger Calls) to financial successes (Halloween)
and there’s no end in sight. Then, of course, there’s Michael Bay (and
his production company, Platinum Dunes) nabbing up as many classic
horror properties as he possibly can: A Nightmare on Elm Street , The Birds , Friday the 13th , and Rosemary’s Baby . All are being remade. Or reimagined. Or Riunite-on-iced, or whatever it is the kids are calling it these days.

So what is there for the horror fan to do when a remake of his or her favorite flick is announced?

Well, hey, you can rend your dress and take to your fainting couch if you’d like. Start a blog and post pictures of your middle finger raised high in the air giving a big ol’ “F you!” to Suspiria ’09. Organize a protest — look at the effect that idea had on Rob Zombie’s Halloween! 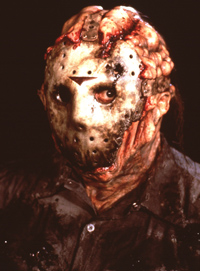 I’ll fully admit, it’s kind of fun to bitch and moan about remakes. But really, it’s a pointless exercise. My blog list of “Top 10 Reasons Why They Should Not Remake Friday the 13th OMG LOL” isn’t going to change things in Tinseltown. Then again, Tinseltown won’t be getting my money… maybe, eventually, they’ll listen to that.

Sometimes, people see remakes and are drawn to the original films; as I said, The Ring led me to Ringu which led me to plenty of other Asian horror films, most of which I’ve dug. Sometimes remakes are actually good. I went in to the theatre to see Dawn of the Dead ’04 all sullen, middle fingers poised and ready to fire at the screen, but then… I liked it!  Honey, you could’ve knocked me over with a feather.  And sometimes, a remake can even be better than the original. It’s an occurrence more rare than spotting a leprechaun riding a unicorn whilst singing the theme from The Dukes of Hazzard… but it can happen!

Is there a point to all this? I think so… something about my dry cleaning maybe? No, that’s not it…ah!  I know: Give movies a chance. The new film won’t sully the old, so just stick with the original if that’s what pleases you. No matter what, don’t get yourself all in a tizzy. It’s pointless and you’ll give yourself indigestion.

Hmm. That all seems simple enough… but does this mean I have to watch April Fools Day?

A fan of horror movies and scary stuff, Stacie Ponder started her blog Final Girl so she’d have a platform from which she could tell everyone that, say, Friday the 13th, Part 2 rules.  She leads a glamorous life, walking on the razor’s edge of danger and intrigue.