I’m fired up for Neil Marshall’s Doomsday, which hits theaters today. Marshall brought us Dog Soldiers , a low-budget werewolf rocker, and creepy-crawly The Descent . But Mommy, where does a movie like Doomsday come from? Turns out that movies reach sexual maturity at about 26 years old, and then they start to breed a new generation. You’re thinking: Genetic propagation of celluloid? Scott, are you just plain wacky? But I can prove it! 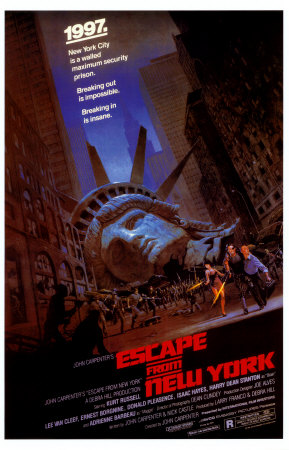 If you doubt that two movies can breed offspring, take a gander at this Maury Povich DNA paternity test. Let’s see if Doomsday has:
1. Mutants
2. Mutants with mohawks
3. Mohawked mutants who yell a lot, snarl, and hit people with axes
4. An abundance of face paint — despite the fact that all manufacturing and distribution chains are out of commission (i.e., WalMart didn’t make it past the apocalypse)
5. Tricked out, armor-plated, post-apocalyptic rides (skull hood ornaments nice, but optional)
6. Mano-a-mano, hand-to-hand duels to the death before a crowd of yelling, snarling, mohawked and face-painted mutants (converted boxing ring nice, but optional)
7. A proclivity for illumination via unsafe open flames

Sorry, Max, but Maury says you a baby daddy.

When Adolescent Movies Do Hard Drugs….

So movies breed at about 26. I just proved that. It’s science, so back off. In 1982, The Thing From Another Planet turned 30 and heard that biological clock ticking.

We may never know who that movie slept with, but it sure wasn’t Gone With the Wind ,
if ya know what I’m sayin’. Her child was a mutated, messed-up discipline problem known as The Thing. Oh snap, there’s Kurt Russel in his second
most bad-ass role. Homeboy had a lot of Disney tripe to make up for, so
maybe it wasn’t that far of a stretch to go from co-starring with a
monkey to sharing top billing with an
alien-mutant-dog-man-monster-thing. The Thing wins my “Most Messed-Up Movie Ever” award. Sure, Re–Animator
was no flowery picnic, but when that dude’s head stretched off the
table, grew spider legs and started walking around singing Jimmy
Durante show tunes? I crawled onto the theater floor and hid my
face in half-chewed Milk Duds. Hard to admit I’m fired up for a movie
that features some bizzaro alien backdoor action, but I am, and if
that’s wrong, then dammit, I don’t want to be right.

A Bun in the Oven…

The Ruins
is coming out soon. Based on the novel by Scott Smith (author of A
Simple Plan), this is the story of some hep cats on a Mexican vacation.
The trailer
looks real tight. Any time you’ve got things crawling under your skin,
I’m in. I don’t know who mommy and daddy are for this one. Clearly,
though, four people in a foreign country who want to go “off the beaten
path” to a desolate, ancient temple that none of the locals will
approach — well, they have to be from the same inbred family that
boldly ventures forth into a) the haunted house where all the kids were
murdered, b) the abandoned insane asylum where all the patients were
murdered, or c)  the derelict space craft where we don’t know for
sure if the crew was murdered, but there are some odd, human-sized
lumps of fecal material scattered about the flight deck. The House on
Haunted Hill might not be the daddy, but it’s probably the slow
uncle you only see on Thanksgiving.

What do you guys think? What movies are 20-30 years old, and ready to breed? I think we need another hour-long Maury special to get to the bottom of this one, but that will have to wait until The Ruins hits the screens on April 4.

Scott Sigler writes tales of hard-science horror, then gives them away as free audiobooks at www.scottsigler.com. His first major hardcover, Infected, hits stores on April 1, 2008. If you don’t agree with what Scott says in this blog, please email him scott@scottsigler.com. Please include all relevant personal information, such as your address and what times you are not home, in case Scott wishes to send someone to “discuss” your opinions.