Is originality overrated, or is it merely defined by the observer? No, I’m not going to start talking about metaphysics and bust out my Stephen Hawking voice box impression (which kills, by the way), but our beloved horror movie genre has never been a benchmark of originality. Horror films are the wholesale dealers of the movie world. Buy something that’s already proven, re-sell it with a markup, and next thing you know you’re bumpin’ down Rodeo with a pig-pimpin’ fur coat and a scream queen on each arm. Wait … that’s the rap game. Oh well, same thing, really.

Nowhere is this more prevalent than the time-honored horror tradition of turning a book into a movie. Back in the old days of VHS and Reaganonmics, you saw the book’s name up on the billboard, you paid your $2 for the movie ticket, and you took your chances. Now, however, the complex series of tubes known as “The Internets” means that the forest is never empty, and someone is always there to not only hear it, but review it as well (or flame it, pw0n it, or Digg it down, for that matter). That brings us to a clash between the tradition of idea resale and the online owners of reputation… 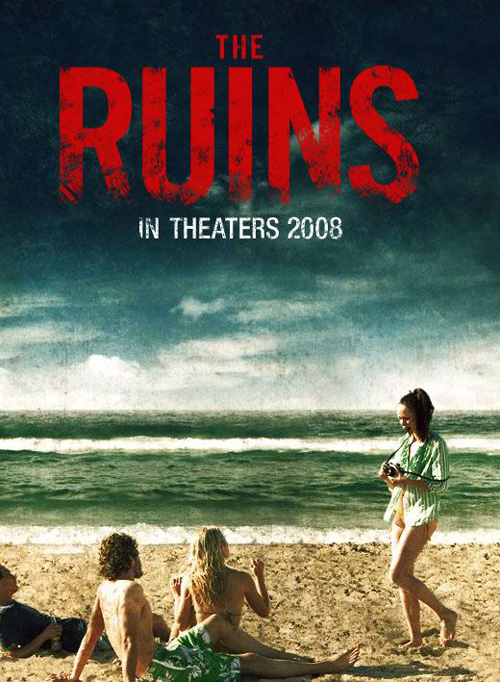 Reviews Ruin The Ruins for Me:
How much faith do we put in online reviews? I was all fired up to see The Ruins when it comes out April 4, but when I went to buy the book on Amazon.com I had to read the buyer comments. Hundreds of them. It’s not that people just dislike this book: They hate it, want to kill it, kill it’s children, go back in time and murder its grandparents, then parade its tarred and feathered corpse through the town square. The people who hate it call the plot predictable and un-frightening; the people who love it say the people who hate it are just too dumb to understand “art.” From the sound of the reviews, if you’re an old-school horror fan, this might not be for you, but if you are amongst the oh-so-educated literati and are therefore fairly ignorant of horror cliches, you’ll diggity-dig it. Why are the others so pissed? Because the book was lauded by none other than Stephen King himself, who called The Ruins, “The best horror novel of the new century.” Whoa doggies, that’s going to send a load of people hustling to their bookshops to snag a copy. And speaking of King and horror novels turned into movies …

Shameless AMC Programming Plug: Christine
It’s a freakin’ possessed car. We all know Stephen King went through a
major substance abuse phase when he wrote Christine. Because seriously… a possessed car? The fact that this plot
sounds so ridiculous is even more stunning when you read the
book or watch the movie, and you realize that both just flat-out kick
ass. Keith Gordon as Arnie Cunningham is a great marriage of
semi-spooky guy with semi-spooky role, the whole being greater than the
sum of the parts. High-horror-art? No. Good time? Hell yes. Not enough for you? Three words: John Carpenter directed. (And a few more words: It airs Friday Apr. 18, 10:30PM | 9:30C.). Was a possessed car an original idea? Have to say yes: An inanimate object that doubled as a Satanic hoopdie with flames shooting out the grille. Know what’s not an original idea? Our entertainment devices showing us ghosties, which brings us to…

Haven’t We Seen This Before: Shutter
A shortage of horror movies puts Shutter
on this weekend’s list of possibilities. “Spirit photography” says ghosts are all around us; we just can’t see them with normal vision.
Didn’t The Eye just do this, like, last month? Or The Ring ,
with videotape? Seems every improvement in home-viewing technology doubles as
a sneaky demon gateway. Makes me wonder if the next movie is That Action Is Not Allowed, where the ghosts are trapped in the opening previews of a DVD and you can’t fast-forward past them.

So Shutter is re-hashing an idea we’ve seen many times before, but at least it’s only re-hashing one idea. If you want to five or more genre movies, and cram them together into one wacky package, you get…

Doomsday, Revisited
Last week I wrote that I was fired up to see Doomsday. I said it’s a combo of Escape From New York and The Road Warrior. Well, I was somewhat right.
It’s those two, plus Lord of The Rings, 28 Days Later and has a
scene-for-scene redux of Aliens. Lord of The Rings? Yeah. Horses, castles, knights in armor. No, I’m not joking. This is a campy, comical B-movie rave-up, not the intense sci-fi
thriller the trailers make it out to be. It’s almost like someone
wanted to legitimize the multi-movie format of the Scary Movie series.

That’s a lot of tears … maybe it’s time to bust out the Hawking voice box and have a wholly inappropriate giggle or two.

Scott Sigler writes tales of hard-science horror, then gives them away as free audiobooks at www.scottsigler.com.
His first major hardcover, Infected, hits stores on April 1, 2008. If
you don’t agree with what Scott says in this blog, please email him
scott@scottsigler.com. Please include all relevant personal
information, such as your address and what times you are not home, in
case Scott wishes to send someone to “discuss” your opinions.