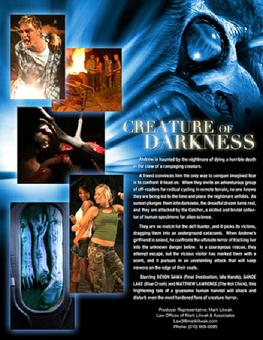 Fangoria just uploaded the back of the one-sheet for Creature of Darkness (formerly called the far-less-horrific Hunter’s Moon). If you squint really hard to read the text, you’ll find that the movie actually has an imaginative plot: A boy’s nightmares become reality when he embarks upon a road trip. He meets the Catcher, “a skilled and brutal collector of human species for alien science.” The Catcher looks like something between E.T. and an anorexic bird of prey. The upshot? It looks like the nature of the ugly character may be strong enough to spawn a sequel or two.

Getting the indie film to this stage has been a trial: The primary financier of the film, a $111 million Powerball lottery winner named Andrew ‘Jack’ Whittaker, became embroiled in a number of lawsuits and a divorce. According to the filmmmakers (via Fangoria), that divorce stopped the film, which began shooting in 2005. Whittaker was able to provide the rest of the funding for post-production, and the film is now ” steamrolling toward the finish line.”