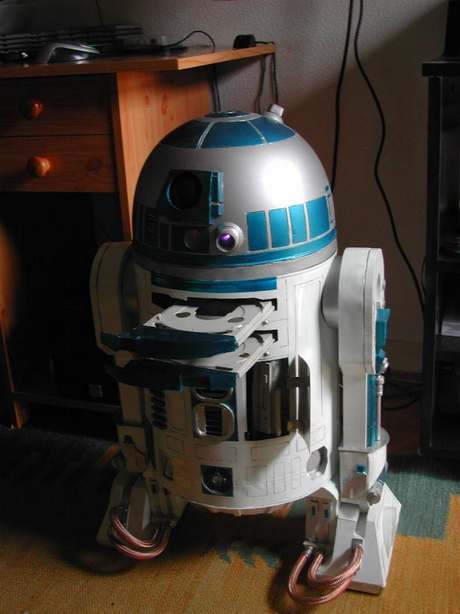 Frankly, R2D2 was never the most excitingly useful of robots. He’s a protocol droid, the far away, long ago galaxy’s answer to a torque wrench. Sure, he can fix an X-Wing occasionally, but what’s he doing when the stormtroopers are storming, or Darth Vader’s looking to lop off one of his master’s limbs with a laser sword? He’s off trembling in a corner somewhere, evacuating his oil in terror. A more useful droid for those troubled times would at least have a gatling gun installed.

Still, useless though he may be, the R2 droid can serve a purpose when properly disemboweled and stuffed with the innards of a modern gaming rig. See this R2D2 case mod, which turns the lovable trash bucket into perhaps the most wonderful computer system geek-kind has ever seen. Unfortunately, it’s only PC. Steve Jobs, this is not the droid you’re looking for.