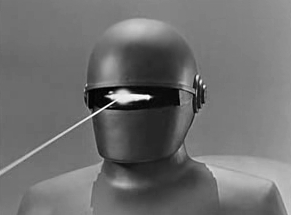 Compared to the lithe mechanical bodies of the bad bots in The Matrix and other modern movies, silvery Gort from The Day the Earth Stood Still looks sluggish and almost huggable. It’s not by chance that this movie became a classic: In form and function, Gort infected 1951 audiences with a new technological vision of robotics that most people could barely wrap their heads around.

Robots had peopled plenty of films since the turn of the 20th century, but mainly in the form of clockworks or “living dolls.” The word “robot” itself comes from the Czech word “robota,” which means “drudgery” or “servitude,” and fell into use after the debut of Karel Capek’s ironic play Rossum’s Universal Robots, which featured crude humanoids as an endless labor source. In film, robots persisted as objects of fantasy, like Fritz Lang’s legendary gynoid in Metropolis, or the Tin Man in The Wizard of Oz. Back then, the idea of robot strength or intelligence surpassing that of man was barely conceivable.

His mechanics hidden, his might undeniable, his reasoning
inscrutable; the idea that another planet’s mere clockworks might be
more advanced than our whole civilization hit home. From that point
onward, filmmakers began to imagine robots as indispensible or
superhuman helpmeets instead of brainless slaves. Even as foes, it was
now their intelligence and ruthlessness we feared, not their stupidity
and brute strength.

So while Gort is a museum piece by today’s standards, you’ll want to pay your respects when The Day The Earth Stood Still airs on Tuesday, April 1 at 6AM | 5C, giving him props for the time when he reigned over 50 years worth of robot prehistory.