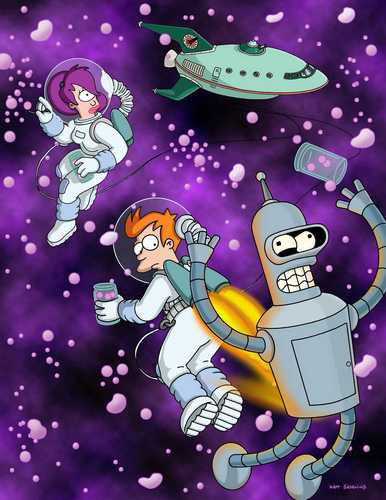 Fans are compelled to accomplish strange things, and the history of fandom is strewn with such examples. One only needs to search memory banks to remember pudgy, moustachio-ed Tron fans squeezed into tight, translucent jumpsuits; obese Canadians wildly flailing around their high school audio-visual rooms with a curtain rod in emulation of Darth Maul; the die-hard Trekker reciting his wedding vows in Klingon.

But it’s not all idiotic nerdery. Sometimes fans do things productive. For example, one guy over at everything2.com has put together a complete timeline of the Futurama universe, stretching from 17 years before the Big Bang to 1,000,000,000,002,000 AD.

This is actually pretty cool. There’s some fun extrapolations that
come from trying to cram random jokes into a causal universal timeline.
For example, from the episode “A Head in the Polls,” we can extrapolate
from the comments of one character that not only does the United States
conquer Earth in the future, but the planet even uses the same
1776 Constitution.

Unfortunately, the timeline isn’t complete: It doesn’t take into account the timeline kerjiggery of the recent Futurama: Bender’s Big Score DVD, which, as I figure it, splits the universe into half a dozen alternate timelines.