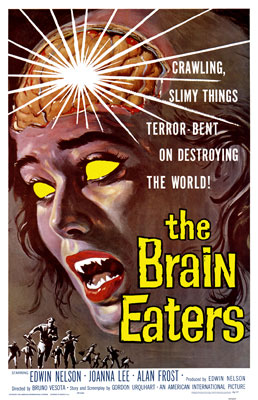 When The Brain Eaters came out in 1958, America was in the midst of Cold War fever. When we weren’t building backyard bomb shelters, we were practicing hiding in them.  If you look at the alien invasion movies that ruled the box office during the fifties, such as Invasion of the Body Snatchers released in 1956, it’s easy to understand the horrific appeal of mind control. Aliens taking over human brains to their own evil ends was a thinly veiled metaphor for the political battle that was raging at the time.

Even when Invasion of the Body Snatchers was remade in 1978, we were still afraid of the Commies and their Red Menace. In these movies, the aliens don’t land and then engage in direct warfare — they take over our brains and turn normal townsfolk into evil automatons. There’s a clear parallel between these insidious invaders and the power of ideology to subvert. It’s way more dangerous for aliens to take over your neighbor’s brain than to simply kill him.

A movie like The Brain Eaters not only offers up plenty of mid-century special effects, it’s an exercise in spotting our collective national anxieties through pop culture. But the real question here is: Why are these movies still being made?

In 1993 Abel Ferarra, of Bad Lieutenant fame, directed Body Snatchers , and just last year Nicole Kidman starred in The Invasion ,
both iterations of the same theme and plot line. The Cold War has
definitively ended and Americans — with our huge cars and Freedom Fries —
have emerged victorious. What are we afraid of now?

Well, our own government, if cultural psychoanalysis through film is to be trusted. Body Snatchers takes place on an army base and The Invasion
is set in Washington D.C., complete with secret government labs. Seems
that we’ve moved from fear of alien ideologies to a general state of
suspicion, even of our own supreme leaders.

Watch the aliens invade in their giant white cone when The Brain Eaters plays on Saturday, March 8 at 4:45AM | 3:45C.