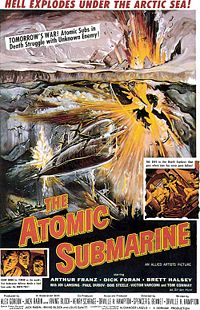 In the face of modern and oftentimes frightening technological advances, mankind is wont to look to the past for reassurance and allegory — to take comfort in the fact that we have triumphed in the face of such adversity before. Take the case of serial director Spencer Gordon Bennett’s 1959 film, The Atomic Submarine.

Ostensibly a camp classic about an undersea alien invasion, the film is actually an exploration of the then newly-unveiled nuclear submarine. Made at the apex of the Atomic Age, when the idea of harnessing the power of the atom was both exciting and terrifying, The Atomic Submarine was crafted to look like a military action film — early previews and promotions for the movie played down its sci-fi aspects and referred only to a dire threat the crew must conquer. The lurking danger is an octopedal one-eyed alien intent on mankind’s destruction — pure science fiction. Or is it ancient mythology?

Watching the film, it becomes difficult not to draw allusions to Homer’s ancient epic The Odyssey, in which the warrior Odysseus, returning home from the successful siege of Troy, finds himself and his crew ensnared by Polyphemos the Cyclops — guess what Commander Vandover and the crew of the atomic Tigershark name their alien threat?

Just as Odysseus and his men were trapped in Polyphemos’ cave and
devoured one by one, Vandover finds his ship stuck nose-first in the
alien craft while “Cyclops” the alien kills one crewman after another.
Vandover’s solution mimics Odysseus’ — like the Greek king’s steak
through Polyphemos’ eye, Vandover turns his blunt torpedo into a
missile, which destroys the alien craft as it attempts to leave orbit.

Why, in the face of nuclear marvel and in the midst of a film that tries so desperately to glamorize life on an atomic sub, did director Bennett choose to reflect on ancient epics? It could certainly have been to illustrate the power and potential of this new technology — Odysseus did, after all, defeat the Cyclops and eventually return home to his wife. Bennett could also, however, have been trying to illustrate the odyssey that technology must take before society accepts it. Nuclear energy showed potential — but it was also fraught with danger.