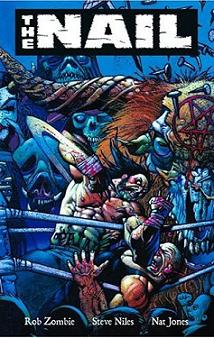 Word is slowly slipping out about Rob Zombie’s next project. Thankfully, it won’t be another Halloween sequel. (While his directorial effort regarding Michael Myers added the signature Zombie personality, it still was another sequel.)

This new project is Tyrannosaurus Rex, slated to go into production in August 2009. Once again, Rob Zombie’s wife, Sheri Moon Zombie, will appear in the film, which will be distributed by Dimension. T-Rex just may be an homage to those larger than life prehistoric dinosaur monster movies a la The Land That Time Forgot .

Then again, Bloody Disgusting has a different take. The site says the movie may be about a wrestler named T-Rex who’s on the run from a motorcycle gang from hell. This theory is based on the fact that Zombie co-created a comic book with Steve Niles called The Nail, the plot of which includes said wrestler and the phantom bikers. Oh, the mystery. Zombie and Dimension know how to milk things, don’t they?