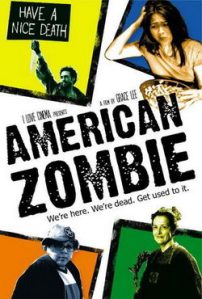 With American Zombie, documentarian Grace Lee takes a stab at exposing the plight of the modern shambling corpse, offering a rare glimpse into zombie culture (they prefer the term “revenant”). Is the world ready? Critics can’t seem to decide:

“A scene in a sweatshop in which the owner explains why he hires zombies for cheap labor has genuine satiric bite.” —  Steven Farber, Hollywood Reporter

“[T]he zombies we meet in Lee and Solomon’s film are pretty ordinary folks, albeit troubled by maggots and rotting patches of skin: They work low-wage jobs, keep scrapbooks with pictures of cute guys, do flower arrangements for funerals (other people’s).” — Andrew O’Hehir, Salon

“If Lee intended primarily to spoof documentary conventions, she should have chosen a theme less commercially overexposed — and worked harder at making it more than just sorta-kinda humorous.” — Dennis Harvey, Variety

“There are plenty of laugh-out-loud funny bits with the occasional social commentary truth lying just beneath the parody, but there are also some really slow parts (maybe they had a zombie helping out in the editing room).” — The Movie Chicks

“The kind of film that might have resulted if Christopher Guest had inexplicably been hired to do Resident Evil 4.” — Peter Sobczynski, efilmcritic