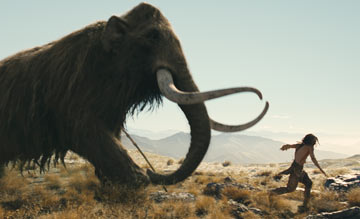 Getting drubbed by the critics is no new experience for Roland Emmerich. Once again, history repeats itself as they line up to take a sabre-toothed swipe at his latest CGI monster movie, 10,000 B.C.:

“Emmerich knows how to fill the screen with spectacle, but not how to field-marshal it. Stampeding mammoths and flying spears play more like visual clutter than the wonders of a lost era brought back to life. He summons up a dead world, only to kill it again, one pixel at a time.” — Keith Phipps, The AV Club

“Camilla Belle… is made up and muscle-toned like the star attraction on America’s Next Top Lifeless Mannequin.” — Peter Travers, Rolling Stone

“I don’t begrudge this plot its stupidity or lack of verisimilitude; some of my best friends are stupid and far-fetched. What makes the movie a drag is the pedestrian joylessness with which it plods through its hypercompressed evolutionary timeline.” — Dana Stevens, Slate

“But the big, climactic fight, complete with an epic snuffleupagus
rampage, is decent action-movie fun. And as a history lesson, 10,000 BC has its value. It explains just how we came to be the tolerant, peace-loving farmers we are today…”– A. O. Scott, The New York Times

“10,000 BC contains some of the shoddiest CGI work in many a
moon, most notably in the creation of a saber-toothed tiger with an
outsized head and weirdly pixelated fur who is rescued from drowning in
a pit by D’Leh and subsequently becomes his protector — no,
seriously.” — Ryan Stewart, Premiere

“…Despite taking place a full 11,905 years before the invention of novocaine, (10,000 BC)
features entire tribes of men and women with teeth so white and
straight they could be selling real estate in Walnut Creek.” — Peter
Hartlaub, SFGate

“It’s as if all the digital tools of new millennial filmmaking fell
into the hands of men who had less storytelling sense than a campfire
bard or a cave painter.” — Michael Sragow, Baltimore Sun