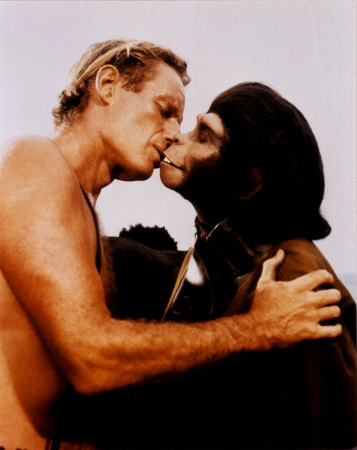 To quote the barrel chested Charlton Heston in Rod Serling’s 1968 classic, Planet of the Apes, “Get your hands off me, you damned dirty apes!” Unfortunately, in real life, this exclamation of stern command would get us nowhere in the event of simian uprising. Apes, after all, have no space devoted in their cerebral cortex for speech processing.

Or do they? Researchers at the Yerkes National Primate Research Center in Atlanta are now claiming to have identified and located the speech center of the chimpanzee brain. Lead by Jared Taglialatela, the team used a PET scan to image activity in the brains of three chimps after doing two tasks. In one, the chimps asked for food by making grunts and other noises. In another they passed rocks out of their cages in exchange for food. The former activity lit up a specific area of the chimp’s brains that the latter did not.

So what does this all mean? Simply put, it means that as soon as some idiot scientist decides to experiment with aiming a gamma ray cannon at that hemisphere of a chimpanzee’s brain, we’re only a few thousand years away — max — of Charlton Heston screaming “It was Earth all along!” in front of the ruined fragments of Statue of Liberty. Great. Thanks again, science.

What Separates You From Chimps [Live Science]